How to Get Away With Murder – She’s Dying: Season 2 Episode 2 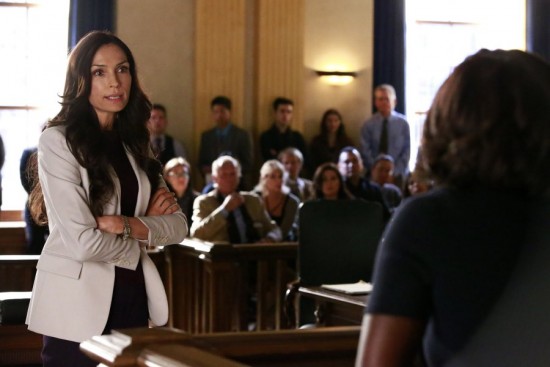 Tonight on ABC their gripping new drama How to Get Away with Murder starring Viola Davis continues with an all new Thursday October 1, season 2 episode 2 recap called, “She’s Dying” and we have your weekly recap below. On tonight’s episode, investigators come up with a shocking new charge against the wealthy siblings Annalise (Viola Davis) is representing.

On the last episode, Rebecca’s disappearance had the students reeling in the Season 2 premiere, but only Annalise and Frank knew that she was murdered, and they vowed to find out who did it. Meanwhile, Annalise defended a brother and sister accused of killing their parents; and an old friend of Annalise’s surprised her at home and teaches her an important lesson. Did you watch the last episode? If you missed it, we have a full and detailed recap right here for you.

On tonight’s episode per say the ABC synopsis “investigators come up with a shocking new charge against the wealthy siblings Annalise is representing. Meanwhile, Annalise endures a difficult cross-examination at Nate’s preliminary hearing.”

Tonight’s episode is going to be great, which you won’t want to miss. So be sure to tune in for our live coverage of ABC’s How to Get Away with Murder season 2 episode 2 — tonight at 10PM EST! While you wait for our recap, hit the comments and let us know how excited you are about this new series.

Tonight’s episode of How To Get Away With Murder kicks off with a scene featuring Wes running through the woods in the dark – he finds the other law students waiting for him in the woods. They can’t find Connor, he is in Annalise’s house with her and she is lying on the floor in a pool of her own blood and grasping for air.

Back to present time: Annalise barges in to an interrogation room where Catherine is being questioned by the police. Annalise tells her that her and her brother that their Aunt was murdered in her car, someone slit her throat. Catherine’s brother rants that there is no way they would kill the only eye witness in this case. Catherine insists that she and her brother Caleb were both home all night, and they never left the house.

Wes is getting ready to leave his apartment and the landlord corners him. He wants to know where Rebekah went – she owes him three months worth of rent. Wes says that Rebekah is not his girlfriend and he has no idea where she is. The landlord wants him to come look through Rebekah’s stuff but Wes refuses.

Annalise goes to meet up with Nate’s lawyer, they joke about how much fun they had while they were hanging out together the night before. She tells Annalise that she doesn’t even feel guilty about having an affair with her. They head to the court room, where Nate is being charged with Sam Keaton’s murder. Eve is representing Nate Lahey, the opposing lawyer argues with the judge that she wants Nate to find a new lawyer because Annalise and Eve are friends and they are working together to cover up Sam’s murder.

Back at Annalise’s office, Frank and Bonnie are alone – he tries to talk to her about what happened between her and Annalise. Annalise calls and interrupts their heart to heart. She tells Frank that the DA knows Eve is friends with her – he orders her to find out how she knows, and whatever else she knows. Back at the office, Asher is freaking out that the DA is on to them. He is afraid Bonnie will be disbarred. They head to Catherine and Caleb’s house and question the maid, she reveals that the night of their Aunt’s murder – Caleb gave them all the night off. Meanwhile, Frank and Lauren are working on getting a copy of the arrest warrant.

Bonnie rushes the arrest warrant to the court house so Annalise can see it. It doesn’t look good for the clients, apparently the police found Caleb’s DNA in their Aunt Helena’s car the night that she was murdered. Annalise is already having a meltdown because she had to take the stand and was questioned about having an affair with Nate.

After recess, Annalise has to return to the stand and continue testifying. The DA asks her about the night that she learned her husband was having an affair, Annalise finally snaps and starts ranting that this is nothing than a witch hunt and she refuses to be “burned at the steak by a petty and amateur prosecutor who doesn’t deserve her or anyone else’s respect.”

Now, it is time for Eve to cross-examine Annalise. Eve points out that Sam cheated on her and she was obviously angry – she calls her a “faker” and claims that she faked being in love and her marriage to Sam was a sham. Eve accuses Annalise of sleeping with Nate just for an alibi, and then announces that Annalise framed Nate and had someone put his fingerprints on the ring that was found at the scene. Annalise doesn’t defend herself – she is speechless. Frank rushes back to the house and reports that Eve sold Annalise out and accused her in front of the whole courtroom of framing Nate.
Meanwhile, Annalise’s team is still working Caleb and Catherine’s case. McKayla and Connor have Oliver hack in to the police database. They realize that they ran two DNA tests on Helena’s car – the first one didn’t find Caleb’s DNA, the second one did. It looks like Claeb was telling the truth and someone did really plant the evidence. When Annalise returns that night Bonnie tells her the good news. They wind up in a screaming match over what happened to Rebekah. Bonnie cries that she did it for Annalise, because Annalise saved her before. Annalise corrects her – she didn’t save Bonnie she ruined her and all of the other kids at her office. Someone should have saved them from Annalise.

The next morning Annalise goes to court and gets Caleb’s case dismissed because she has evidence that the DNA test was tampered with. The judge says that Caleb is free to go and the murder charges against him is dropped. Then, it’s time for everyone to report to Nate’s hearing. The judge announces that the DA did not present enough evidence to formally go to trial and charge Nate with murder – she spent all of her time focusing on Annalise. Nate is free to go.

Connor and his boyfriend Oliver have a huge fight when Oliver learns he told all of his friends that he was HIV positive. Oliver finally breaks down and tells Connor how he got it. The night that he found out Connor cheated on him he got drunk and hooked up with a stranger, and he doesn’t even remember what he looks like – that’s how he got HIV.

Eve goes to Annalise’s house, she is emotional. Annalise cries that she doesn’t understand why Eve would go after her like that on the stand. Eve admits that it was personal, she hates the way that Annalise makes her feel – because she is still in love with her after all of these years. Eve apologizes and leaves. Annalise grabs her hand, she tells Eve that her feelings for her were real too – but she got scared. At the end of the day Annalise wants Eve to know that she is the “most beautiful thing that ever happened to her.”

Laurel shows up at Frank’s house, she says she just wanted to celebrate that she got an “A” on her test. Frank can tell that isn’t what she came for – she wanted to have sex with him. Frank informs her that it isn’t happening, and he is “closed for business,” until she gets to know him. Wes heads home, and Rebekah’s apartment is open. He spots a photo of Rebekah on her desk and the guy in the photo just happens to be out on a date with McKayla.

Tonight’s episode ends with another scene of Annalise gasping for breath on the floor – Connor doesn’t want to leave Annalise behind, but the other law students tell him he has no choice. A few feet away from Annalise, Bonnie is lying on the floor – and she appears to be dead too.