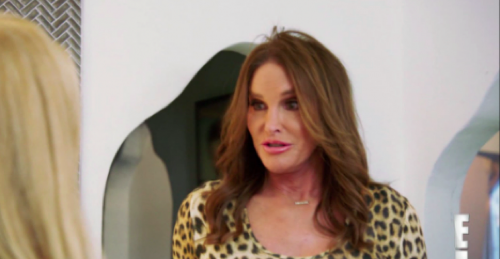 I Am Cait continues tonight an all new Sunday, August 30 season 1 episode 6, called “The Dating Game” We’ve got your recap down below! On tonight’s episode, Cait comes to realize how hard it can be to date a trans woman after hearing Candis talk about her relationship history, but that doesn’t deter Cait from trying to get Candis to believe in love again.

On the last episode, Caitlyn began to feel included in the LGBT community after attending a New York City Pride event; at the same time, she struggled to reconnect with her male friends; and received advice from Scott Disick. Did you watch the last episode? If you missed it, we have a full and detailed recap right here for you.

On tonight’s episode as per the E! synopsis “Cait comes to realize how hard it can be to date a trans woman after hearing Candis talk about her relationship history, but that doesn’t deter Cait from trying to get Candis to believe in love again. Meanwhile, Jenny Boylan wants to know who has caught Cait’s eye.”

Cait is learning more and more about the transworld on tonight’s all new episode of “I Am Cait” and it’s kind of scary about all the decisions that await her.

And the first thing she has to consider is safety. Did you know that there have been cases where doctors have used the fact Transwomen are transwomen to fondle them? In these cases, they can often convince these women that they are just doing normal procedures. And it doesn’t dawn on them that something is wrong until they uncomfortable level rises or they go to see another doctor.

This happened to Cait’s friend Candis and Candis now laughs it off but merely hearing about it made Cait feel conscious about her own doctors. But, luckily, Candis pointed out a few things to her. She told her what to expect from a doctor and by going along with Cadis to one of the woman’s doctor appointments did show Cait what’s awaiting her.

Even if she’s now finished with her procedures there’s still the shots and hormone checks that she has to keep track of. And so her health is also something she’s can’t be willing to ignore.

And there’s also the identity question.

Cait has been asked, quite a lot recently, about whether or not she was ready to begin dating again. And so far Cait has dragged her feet on this. She says she doesn’t know about her sexuality and then later admits that she felt slightly uncomfortable when her friends took her out and she was surrounded by male dancers. So one lovely took Cait aside and said listen its ok to be sexually attracted to women.

Cait has already been married to and divorced from three women. So just because she’s now a woman herself doesn’t mean she has to start liking man. Apparently that’s a big issue with transwomen. Once they transition they then believe that need to date men in order to be consider “real” women.

So Cait was told it was ok to be whoever she liked.

And that point was reiterated at lunch Cait late attended. There, Cait heard for herself how hard it is to start dating again. Men often stop thinking about having a relationship once they hear the word trans and most times they only call afterwards for a quick hook-up.

Thus it’s easier for some transwomen to date transmen or simply other women. These groups have been known to be a little more accepting of their gender history. And Cait has been told to just stick to women.

Candis has tried internet dating and so far the guys she runs into tend to believe that’s just because she’s trans that automatically means she’s up for something. As if they’ve been saving up their closet fetishes just for someone they believe who take them at any cost. Although sadly there have been such cases.

And that includes Candis.

She’s been in abusive relationships that she didn’t think she deserved to leave. And so naturally she doesn’t have a good track record of differentiating the bad ones from the good ones. But turning to someone who specialize in matchmaking wasn’t such a win for her.

Both she and Cait were uncomfortable telling a third party about what they wanted in a relationship. Plus the part where they actually had to describe this perfect mate and write down a possible name simply put them off the idea of using someone.

Cait felt the only thing that Candis needed was faith. And later, after they visited a camp for transkids, they got back a little more of their shine. If the kids could believe that their future is worthwhile despite the many trials they know is ahead of them then there’s no reason for either Cait or Candis to give up on looking for love.

And even if it’s merely the two of them that will be driving around in a Lamborghini while Candis’s car is getting worked on then that’s fine too.