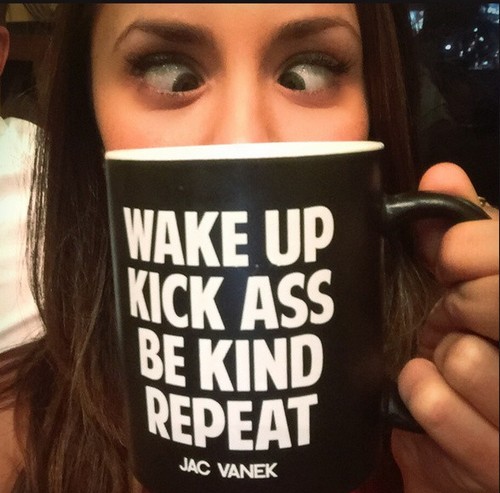 Star of The Vampire Diaries, Ian Somerhalder, is making headlines again, but this time it’s not for his relationship with Nikki Reed, it’s for being a complete jerk to a fan. But what’s better is that Nina Dobrev appears have sent her ex a nasty reminder of how a star is supposed to behave! Nina posted a picture of herself on May 31 on her Instagram account looking like an idiot (shot at Ian!) behind a cup on which is printed in bold ‘WAKE UP – KICK ASS – BE KIND – REPEAT.’ Was this a message to unkind Ian?

Somerhalder and Reed were apparently continuing their honeymoon in Paris last week, when some fans gathered in front of the hotel they were staying at, hoping to get a picture with Somerhalder. Apparently, someone forgot to tell Ian that this is normal behavior for fans, and that it really is not a big deal to stop and take pictures with them. Ian Somerhalder was not fond of his fans waiting for him, and instead of stopping to take photos, he stopped to lecture them.

So, while he could have simply taken photos with his fans and kept moving, he gave a speech to his fans, which probably took way longer than snapping a few pics. He said, “Hey guys, listen. Everybody stop. No no, listen. I love you guys, but I’m not taking a single photo today. It’s MY day. Don’t follow us please. I love you guys. You’re so good to us, but don’t follow us. It’s too much.” Well, someone’s ego has been inflated. Does Nina Dobrev’s ex think people are stupid? Is this two-faced hypocrisy what the sole surviving star of The Vampire Diaries thinks fans will accept? At least have the respect not to tell people you ‘love’ them while you are slapping them in the face.

Ian then took to Instagram to apologize for the incident, but his apology doesn’t really sound all that sincere; more of a way to get his fans to love him again. But wait, isn’t that what caused the problem in the first place? Anyway, here’s what Ian wrote on his Instagram; “Looking at the world through my eyes and always trying to see it through yours. I see you. I see all of you and find great beauty in each set of eyes. Anyone who knows me understands that I spend a great deal of my life with our fans. our audience. The people that make this show and ISF happen. All with hearts, minds, bodies and souls. It blows my mind that a man who tried to love so much, a man asking for one day, just one day to have a quiet walk down the street is so upsetting to people. So much love to you all…Goodnight and thank you.”

Okay Ian Somerhalder, that sounded more like a Shakespearean sonnet than an apology or explanation for your actions. If you cannot deal with fans, and take a few moments to take photos with them, then you should not be in the entertainment industry. There really is no excuse for his actions. Somerhalder could have taken the photos and then had his “quiet walk.”

What do you think? Was Ian Somerhalder justified in his actions, or is he just being a cry baby? Can we see more clearly now why Nina Dobrev dumped Ian long ago? Does this incident and its aftermath provide a window into a soul that is consumed with ego and an inflated self-image on the one hand, and contempt for others on the other hand? Let us know in the comments below.