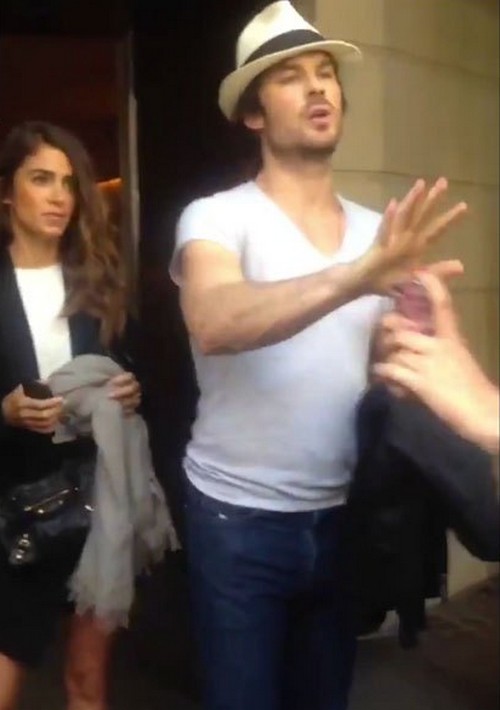 Ian Somerhalder is not a man of the people. The Vampire Diaries star with his new wife Nikki Reed was caught on video yelling at his fans to stop following him, and refusing to take pictures with them. Ian and Nikki ran in to a mob of Vampire Diaries fans outside of their Paris Hotel – and one witness caught the entire scene on video, which was mysteriously deleted off from Twitter. Let’s just say, Ian Somerhalder is not that different from his on-screen vampire persona Damon Salvatore, looks like The Vampire Diaries star is ungrateful and showed some nasty true colours. Ian should keep in mind that some Hollywood insiders think that without his TVD fans he is nothing more than an aging C-list non-entity.

In the video Ian’s fan begin begging him to take photographs with them when he steps out of his hotel with Nikki Reed on his arm. Ian promptly refused and began lecturing them, “No, no, no. Hey, listen. Just stop. Everybody, listen. I love you guys. I’m not taking a single photo today. It’s my day. Don’t follow us, please. I love you guys. You’re so good to us. You’re so awesome.” Then, the tears started flowing – one diehard fan began sobbing and Ian half-heartedly comforted her, but still refused to take a photo with her! The not-so-flattering video of Somerhalder made its rounds on Twitter before being mysteriously deleted, and his fans were not impressed with the way he treated the people in the video. One even compared his diva-ish behavior to that of Zac Efron.

Either Ian Somerhalder is getting a little grumpy in his old age, or the 36 year old’s new wife Nikki Reed has turned him in to one of the least friendly celebrities ever. Ian Somerhalder has always marched to the beat of his own drummer – but we have never seen him being this rude before! Do you think that Ian has a right to his privacy and his fans are a little overbearing? Or was he being a total diva? Let us know what you think in the comments below!