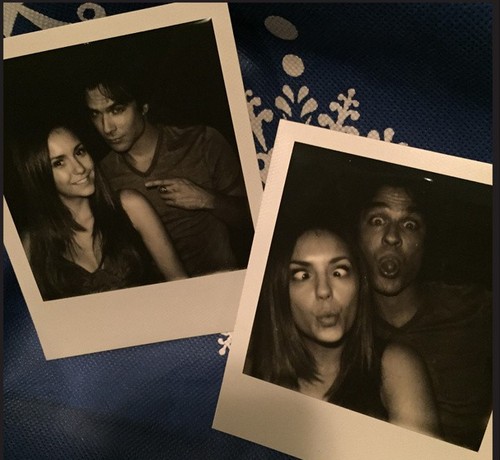 Ian Somerhalder and Nikki Reed got married on Sunday, coincidentally [not] right after Nina Dobrev quit The Vampire Diaries. And for people who genuinely believe that the timing was a coincidence – either of the wedding or Nina quitting – then you’ve got another think coming.

Think about it – what would it have looked like if Nina Dobrev quit The Vampire Diaries – or announced she was quitting – right after Ian Somerhalder and Nikki Reed got married? Everyone, from the most seasoned gossipers to the most disinterested fans, would assume that Nina quit because Ian Somerhalder married Nikki Reed. They wouldn’t think it had anything to do with her career, or the show’s quality, or really, anything apart from Nina not wanting to hang around her married ex-boyfriend anymore.

We’ve already reported extensively on the on-set awkwardness that has frequently arisen when Nina Dobrev and Ian Somerhalder have steamy romantic scenes together, and not just because they cause issues between Ian Somerhalder and Nikki Reed. We’ve also reported on them because they’ve made the working relationship between Nina and Ian very difficult, and Nina quitting was only inevitable.

The way that we assume things went down, although this isn’t confirmed or guaranteed, is that Nina was told [out of politeness and deference to her previous relationship with Ian] about the upcoming wedding. Realizing what we just stated, Nina decided to announce that she was quitting BEFORE the wedding, so that people didn’t jump on the ‘Nina can’t stand to be around her married ex-boyfriend’ bandwagon. There’s no way the timing of this wasn’t completely and totally arranged, down to every PR statement and announcement.

Don’t you agree? And do you believe that Nina was told about the wedding before it happened, so that she could manage her leaving and control the public’s response to her quitting The Vampire Diaries? Let us know your thoughts in the comments below.