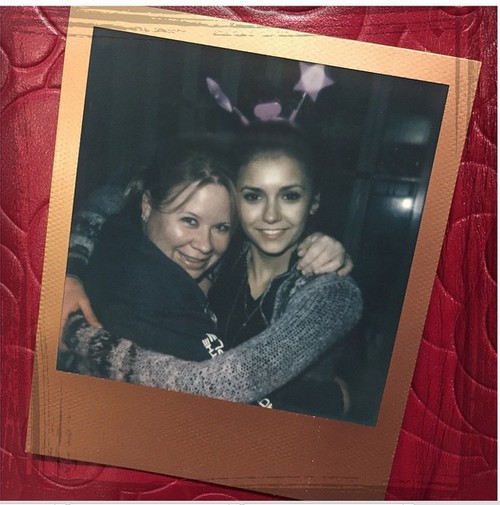 Nina Dobrev has officially quit The Vampire Diaries, and it will only be a matter of time before the CW show is cancelled altogether. Since Nina Dobrev’s break-up from her co-star Ian Somerhalder, The Vampire Diaries’ ratings have been hitting new lows – and everyone knew it was only a matter of time before Dobrev quit the show and her character Elena Gilbert officially exited.

I’ve just spent the most beautiful weekend on Lake Lanier in Georgia with my own TVD Family, the cast and crew of The Vampire Diaries. I want to be the first to tell you that it wasn’t just a holiday celebration, it was a goodbye party. I always knew I wanted Elena’s story to be a six season adventure, and within those six years I got the journey of a lifetime. I was a human, a vampire, a doppelganger, a crazy immortal, a doppelganger pretending to be human, a human pretending to be a doppelganger. I got kidnapped, killed, resurrected, tortured, cursed, body-snatched, was dead and undead, and there’s still so much more to come before the season finale in May. Elena fell in love not once, but twice, with two epic soulmates, and I myself made some of the best friends I’ll ever know and built an extended family I will love forever.

There’s more to come before we wrap this up, and I promise you’ll get to hear all about my experiences over the next month as we approach the season finale (I have given an exclusive interview for the June issue of SELF Magazine that I am excited for you to see!), but until then I invite you to hop on the roller coaster ride that is Elena Gilbert’s life and join me as I celebrate her and prepare to say goodbye to her — and to my work family — as I move on to the next chapter of my life. I want to share this goodbye with all of you (this weekend’s pictures were just the beginning). You, the wonderful fandom who gave more love, support and passion than anyone could have ever imagined seven years ago, when a young Degrassi girl from Canada showed up in LA to audition for ‘that Twilight TV show.’ ;) I love you all. Fasten your seatbelts. If you think you know what’s coming, you don’t.

CDL has been reporting for months now that Nina Dobrev was quitting The Vampire Diaries. Between the show’s dismal ratings, and Ian Somerhalder’s new fiancee Nikki Reed putting the brakes on Elena and Damon’s love scenes and nearly killing the fandom – Nina really had no choice. Although Julie Plec insists that the show will go on without Nina Dobrev (and Michael Trevino who also recently quit), the odds of that happening are slim to none. Nina is a business woman, she would rather quit the show, than have a cancelled show on her resume. Quitting now is probably the smartest publicity move that the TVD actress could make. Now the headlines will read “Vampire Diaries Cancelled Because Nina Dobrev Quit,” instead of “Nina Dobrev’s Series Cancelled Due To Low Ratings.”

Do you think that The Vampire Diaries will really continue without Nina Dobrev? Did she quit because she knew the show was going to be cancelled? Will you miss Elena Gilbert, or are you happy to see her go? Do you think her decision to elave had anything to do with Ian and Nikki’s engagement? Let us know what you think in the comments below!