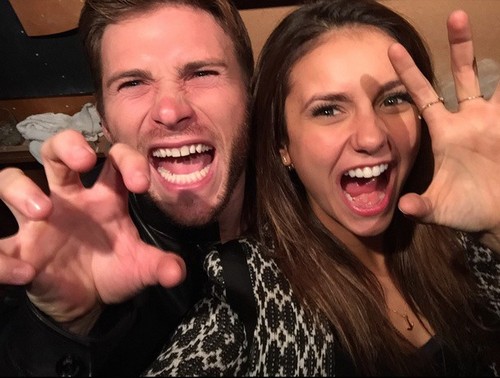 Nina Dobrev and Ian Somerhalder have somehow managed to stay friends, even among all the drama and gossip surrounding their breakup. However, their friendship has understandably been strained in the recent months, after Ian went public with his Nikki Reed relationship and engagement. Maybe Nina always assumed at the back of her mind that she and Ian would get back together, but now she knows that’s not going to happen – and obviously, that’s been an issue for her.

In fact, some of our sources are saying that as Ian’s wedding to Nikki Reed gets closer and closer, the relationship between Ian and Nina has gotten more difficult. It was fine for a while because The Vampire Diaries writers went out of their way to keep Nina and Ian apart, but the story lines and plot points have brought their characters back together. And when two exes are kissing, making out, and faking romantic feelings for each other, the lines are bound to get blurred in real life.

So of course, it’s awkward, weird, and uncomfortable – and even more so because Nikki Reed is allegedly insecure about her fiance’s friendship with Nina. But at the end of the day, it’s likely that Nina and Ian will call their friendship quits once Ian and Nikki get married. Even though there were rumors that the wedding was getting called off, our sources have confirmed that Ian’s wedding to Nikki is definitely, definitely happening – and that Nina will NOT be present. I mean, it makes sense – it’s difficult for two exes to be friends, period, much less exes who dated for several years and might have once been thinking about getting married.

What do you guys think about Nina and Ian ending their ‘friendship’ after Ian’s wedding? Let us know your thoughts in the comments below.