Nina Dobrev Quit The Vampire Diaries To Get Away From Ian Somerhalder or For Movie Career? 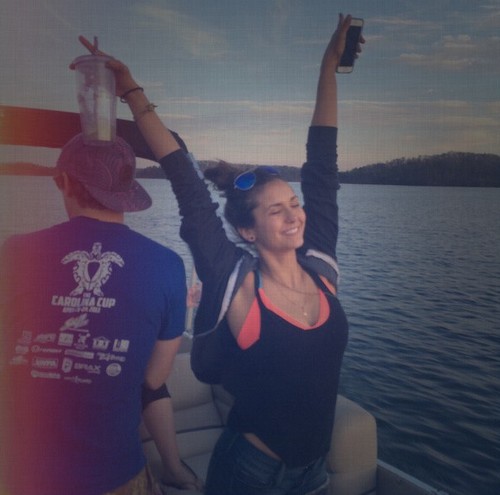 Nina Dobrev officially announced her exit from The Vampire Diaries yesterday, which shouldn’t surprise anyone who has been keeping track of this situation. Nina Dobrev has been raring to get her film career going for a long time now, and she’s been stuck on a six season contract with the show. Nina couldn’t leave without breaking the contract, so she’s been making the best of the situation – despite the fact that she’s been forced to work with her ex-boyfriend, Ian Somerhalder who is engaged to Nina’s ex-friend Nikki Reed.

We’ve covered Nina’s awkward situation with Ian several times here at CDL, but the crux of the matter is that neither Nina nor Ian feel comfortable working with each other – and yet, by nature of the storyline on TVD, they don’t have a choice. Their love story has been the central driver of the TVD fandom for the past few years, and to give credit to the writers, they kept Nina’s and Ian’s characters separate for as long as humanly possible. However, the story has gotten to a point where you simply can’t keep them apart for much longer, not without raising eyebrows and negatively affecting the story.

Of course, there’s also the fact that Nina Dobrev is far and away the best known member of the cast, and she wants to take advantage of that. Nina’s young, she’s beautiful, and she’s talented – why would she extend her contract on a CW TV show when she has the opportunity to launch a promising film career or be on prime-time TV? Nina doesn’t want to work with her ex-boyfriend anymore, and she’s explored almost every angle of her characters on The Vampire Diaries. There’s nothing left for her to learn, and there’s nothing the show has left to offer her.

What do you guys think about Nina Dobrev quitting The Vampire Diaries? Do you think the quitting had more to do with not wanting to work with Ian Somerhalder anymore, or launching a movie career? Or both? Let us know your thoughts in the comments below.