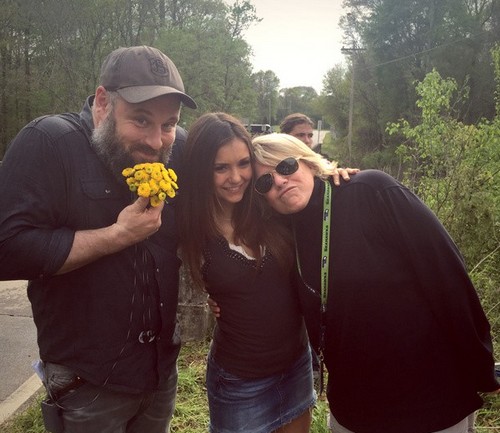 Nina Dobrev is free at last. Okay, that might be a bit harsh, but she is ‘free’ in every sense of the word. Nina Dobrev has been tethered and chained to The Vampire Diaries for the past six years, and while the show might have helped establish her as a household name in the tween household, it definitely hasn’t been helping her much lately.

In fact, even though Nina is a gracious person and will always be grateful to The Vampire Diaries for giving her a launching pad into Hollywood, she probably would have landed something that would have given her equal footing. Sure, landing the lead of a network TV show isn’t easy, but hasn’t the show done her more harm than good lately? Nina’s personal life fell apart after she broke up with Ian Somerhalder, after which she was forced to see him every day for YEARS – and for the last year with watch Ian’s over-the-top famewhore PDA with her ex-friend Nikki Reed! Nina’s career hasn’t benefit in any drastic way for the past few years, and even though she’s been doing consistently strong work on the show, she hasn’t really landed any major gigs. So not only has lovely Ms. Dobrev been spinning her wheels on a show that has long since lost its glamour but she is forced to watch her ex boyfriend and ex girlfriend fall madly in love and get engaged – now isn’t that fun?

In fact, Nina’s highest profile movie role to date still remains a very small role in ‘Perks of Being A Wallflower,’ even though she had an equally small presence in ‘Let’s Be Cops.’ So of course, Nina is probably relieved to FINALLY be free of the show, now that she’s free to pursue more creatively challenging and rewarding work.

What do you guys think about Nina Dobrev leaving the Vampire Diaries franchise? Do you think she’s relieved to be free of the franchise, or do you think that she’s bittersweet about leaving a steady fat paycheck – which is still very difficult to land in Hollywood? And do you think she’ll manage to launch a successful movie career? How about a major role on a prime-time TV show.