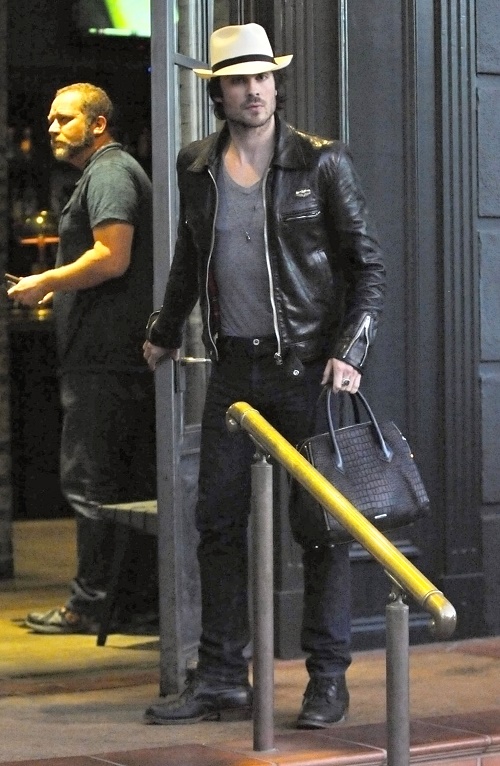 Ian Somerhalder and Nikki Reed are engaged, but sources have suggested that they’re not planning to go public with the engagement announcement until this season of The Vampire Diaries Season 6 ends. Producers have allegedly warned Ian that going public with an engagement announcement would detract from the show, especially since they’re trying to sell Damon Salvatore and Elena Gilbert as the true love coupling on the show. And considering that those two characters are played by Ian Somerhalder and Nina Dobrev, hearing about Ian’s engagement to another woman would just detract from that, no?

Of course, just because Ian and Nikki won’t go public with the fact that they are engaged doesn’t mean that others don’t know. Apparently, almost everybody who works on The Vampire Diaries knows about the engagement, including Ian’s long-time ex-girlfriend, Nina Dobrev. For those who need a quick primer on how that relationship went, here it is: Ian and Nina dated for a few years, and then broke up amid rumors of cheating and affairs. We don’t know if Ian did cheat on Nina – or the other way around, for that matter – but we do know that he was with Nikki Reed for significantly less time than he was with Nina, and yet, he’s already engaged to Nikki.

Despite the circumstances of their breakup, one has to imagine that Nina is feeling hurt over this. I mean, it always sucks seeing an ex on a regular basis, but then having to work with that ex and pretend to have feelings makes it that much worse. Then, you tack on the fact that they are engaged to their new girlfriend and flaunting it in everyone’s faces? Well, it makes everything doubly difficult, and we have to commend Nina for taking it all in stride.

What do you guys think about Ian Somerhalder and Nikki Reed being engaged? Let us know your thoughts in the comments below.