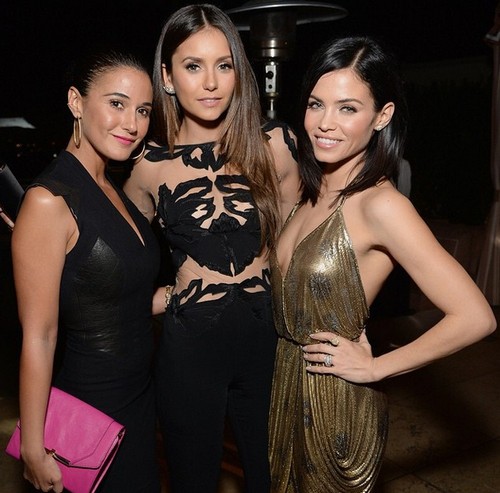 Nina Dobrev used to be friends with Nikki Reed, but that was before Nikki started dating Ian Somerhalder. Nina’s not one to publicize her feelings about her ex-boyfriend dating her ex-BFF, but one can imagine how it feels no? Of course, I can’t exactly go around blaming Nikki either, because she herself went through the same thing; not many people know that she and Robert Pattinson used to hook up before Rob dumped her for Kristen Stewart, her former best friend. Basically, Hollywood sucks.

Anyway, Nina Dobrev stayed relatively quiet on the whole Ian Somerhalder dating Nikki Reed saga, but sources tell us that her feelings have changed from angry indifference to pure rage lately. Why is that? Well, it’s partly because Ian Somerhalder and Nikki Reed have upped their PDA, especially around The Vampire Diaries set. But the other reason is because Ian Somerhalder and Nikki Reed are engaged, and obviously, an ex-girlfriend is going to be devastated and angry at that. I mean, Ian waited less than a year to start dating someone else after Nina dumped him, and that someone else happened to be her friend – how else should she feel? And not only that, but they get engaged within months of starting to date when she herself dated Ian for more than a year and nothing happened. Again, how is Nina supposed to feel, apart from devastated and angry?

A source close to Nina told Hollywood Life, “She can’t believe this is all happening so fast. Nina will put on a brave face and say all the right things. But inside it’s killing her.” Yeah, I can’t imagine the tension on that set right now, and I totally believe any report suggesting that Nina is literally seconds away from quitting The Vampire Diaries. At this point, she has a promising career, so why should she put herself through the torture of seeing her ex-boyfriend engaged to her ex-friend?