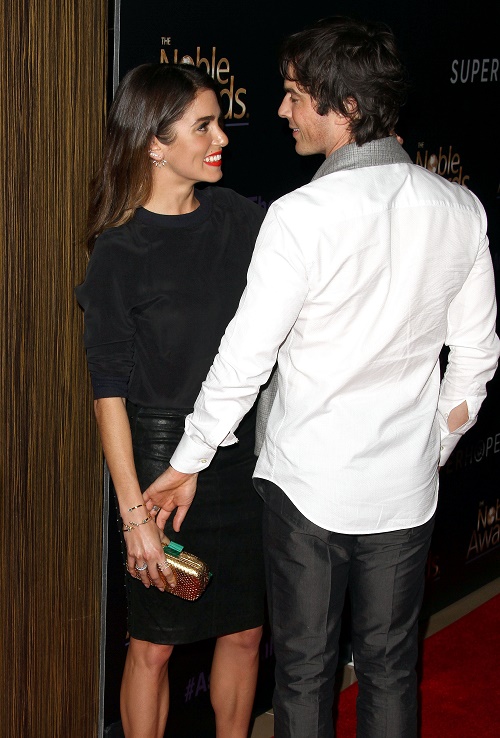 Ian Somerhalder and Nikki Reed were officially married in a sunset wedding on Sunday, April 26, but pals of the couple fear their whirlwind marriage could quickly end in a divorce. Ian and Nikki began dating in July 2014, less than a year ago – and their relationship has been on a fast-track ever since. Skeptics of the couple can’t help but notice that Nikki and Ian’s whirlwind wedding mirrors Nikki’s marriage to American Idol singer Paul McDonald, which was over before it barely began. At just 26 years old, Nikki Reed now has two weddings under her belt – and possibly two divorces before the year is over.

The May 18 edition of OK! Magazine explains, “It may seem like a match made in vampire heaven, but the sudden wedding of Twilight actress Nikki Reed and The Vampire Diaries star Ian Somerhalder is raising some eyebrows. While the PDA prone couple have been inseparable since hooking up last July, sources in their inner circle tell us that their sprint down the aisle could be too much, too soon.”

It really doesn’t matter if you are two famous actors or working middle class average Joes – the success rate for couples that get married less than a year after they begin dating is dismal.

One insider dished to OK! Magazine, “This has Nikki’s MO written all over it. She jumps headfirst in to things and gets caught up in the moment. There are a lot of people who could see this ending in tears. She’s a heartbreaker who adores those exciting first few months of a relationship, but some folks are questioning whether she truly understands the sanctity of marriage.”

While we totally agree that Nikki Reed has a tendency to rush her relationships, it takes two to tango. Ian Somerhalder knew all about her first divorce, and he still dove headfirst into their whirlwind relationship right alongside Nikki. Do you think that Nikki and Ian got married too soon and rushed their wedding? Do you think they will wind up getting a divorce just like Nikki’s first rushed marriage to Paul McDonald? Let us know what you think in the comments below!