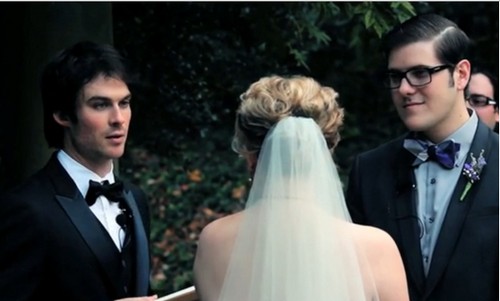 Is Nikki Reed pregnant with Ian Somerhalder’s baby? The Vampire Diaries star and his new wife shocked everyone by getting married on Sunday April 26 in Santa Monica, California. Ian and Nikki’s engagement might just go down as one of the fastest ones in Hollywood – the couple just confirmed they were getting married in December 2013 and have been dating for a total of nine months. Generally when a couple rushes down the altar that quickly – it’s because they are trying to beat a baby bump.

Ian Somerhalder dated his Vampire Diaries co-star Nina Dobrev off and on for several years before he began hooking up with her now ex-friend Nikki Reed. One of the rumored reasons behind Nina and Ian’s relationships demise was the fact that 36 year old Ian wanted to settle down and start having babies – but his much younger girlfriend Nina wasn’t ready to make that commitment especially since her career is growing. Apparently, Nikki Reed was more than willing to get married and start having babies. We can’t even fault Ian for speeding up the relationship, he is almost 40 years old, no one wants to wait until they are nearly 50 to start changing diapers. But, what is Nikki’s excuse?

Rumors have been popping up on the Internet for weeks now that Nikki Reed was pregnant with Ian’s baby – and considering their hasty wedding, there seems to be some possible truth to the speculation. The Twilight actress already has one failed marriage under her belt and one would think that if she had learned anything from her last wedding it would be not to rush into it – unless she was already pregnant and wanted to do the nuptials sooner rather than later so that she didn’t have to try and hide a baby bump under her wedding down.

Do you think that Nikki Reed is pregnant? Is that why she and Ian Somerhalder rushed to get married? How do you think Nina Dobrev will feel about her ex-BFF having her ex-boyfriend’s baby and last name? Let us know what you think in the comments below!