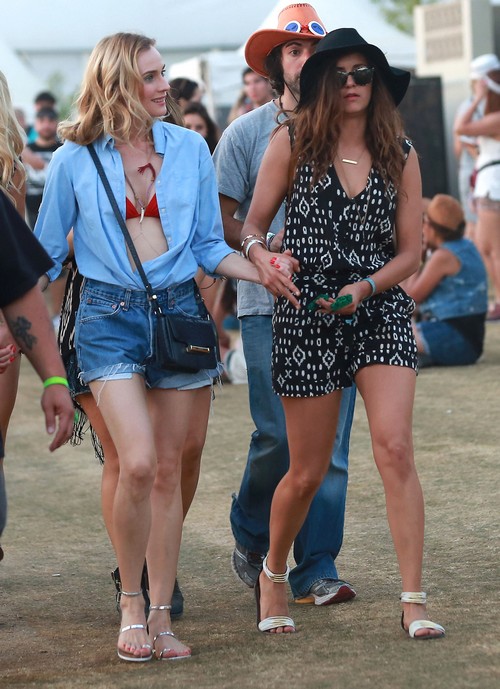 Nina Dobrev just quit The Vampire Diaries and wrapped her last day on the set, she headed out to Coachella with pals to celebrate. Earlier this month Nina Dobrev confirmed that she had quit the popular TV show after six seasons – although Nina insists that she quit the show because she wanted to pursue a movie career, everyone knows she did it to get away from her ex Ian Somerhalder and his new fiancée Nikki Reed.

Nina posted a “heartfelt” message on social media saying goodbye to the cast and crew at The Vampire Diaries, and told Elena fans that she was devastated to be leaving the show, however it was all part of a long-term career plan. For someone who was “devastated” to leave the show and told everyone how hard and sad her last few days were on the set of the show – she was all smiles at Coachella when she partied with her pals Joshua Jackson and Diane Kruger. It’s clear that she isn’t exactly torn up about her decision to leave the show – if anything at Coachella Nina appeared happier than she has in months.

Nina Dobrev has taken multiple hits to her ego over the course of the last year. First, Ian Somerhalder began hooking up with her ex BFF Nikki Reed, then The Vampire Diaries took a major hit in the ratings, coupled with Ian getting engaged to Nikki and the couple stealing all of her thunder on the set of the TV show. Now, Nina is ready to start rebuilding her image and eager to put The Vampire Diaries and Ian Somerhalder and Nikki Reed behind her. We can’t exactly say we blame Nina for wanting to disassociate herself from TVD and her ex-boyfriend, but being Josh and Diane’s third wheel at Coachella isn’t exactly a great way to kick off the new and improved Nina.

Will you miss Nina Dobrev on The Vampire Diaries? Did you think she is happy that she is finally done with TVD and can put Nikki and Ian behind her? Let us know what you think in the comments below!