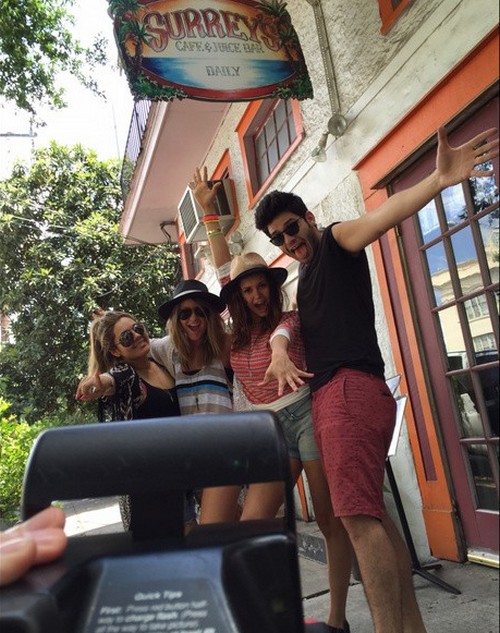 While Ian Somerhalder and Nikki Reed canoodle on their honeymoon, Nina Dobrev refuses to be upstaged by her ex and is embarking on a cross-country road trip to find herself! Nina Dobrev is officially unemployed and no longer working on The Vampire Diaries, the actress announced she was quitting weeks ago and planned to pursue a movie career. But, Nina learned rather quickly that landing movie gigs is not as easy as she thought – and she hasn’t scored any roles on future blockbusters yet.

So, what is a girl to do when her ex-boyfriend marries her ex-BFF and she can’t find a job? Well, if you are Nina Dobrev then you pack up your friends, and head off on an epic summer road trip to travel across the country and find yourself. Or in Nina’s case, you head off on a road trip to prove to the world that you are having a blast and aren’t secretly crying yourself to sleep at night over the fact that Ian Somerhalder just married Nikki Reed after nine months – even though you put in over two years and didn’t get a ring.

The last thing Nina Dobrev will ever admit is that she is upset about Ian Somerhalder and Nikki Reed’s wedding – but according to insiders Nina is in a serious funk right now, and her friends convinced her to take a road trip with them to try and cheer her up. A pal close to Nina’s circle dished, “Nina tries to play it cool, but she is devastated over Nikki and Ian’s wedding. She thought that as soon as she quit TVD she would land some huge movie role just to prove that she didn’t need Ian or the CW show, but that has been a total failure so far. So, her friends planned this road trip to try and cheer Nina up. It seems to be working so far!”

Nina and her friends are officially on the road, she posted a photo on Instagram of her and her friends having drinks and captioned it, “5 friends. 2 vehicles. 1 epic adventure. Oh and a cat. Cross country roadtrip Hashtag? CHECK. Final destination, Los Angeles. Watch out America… The Gypsy 5 might be coming to a city near you! #Gypsy5onARide.” Do you think that Nina’s roadtrip will help her get out of her funk, and forget about Nina and Nikki’s wedding? Do you think Nina is clever enough to realize that the term ‘Gypsy’ is pejorative and considered a racial slur by the Roma people and other more enlightened folk? Let us know what you think in the comments below! 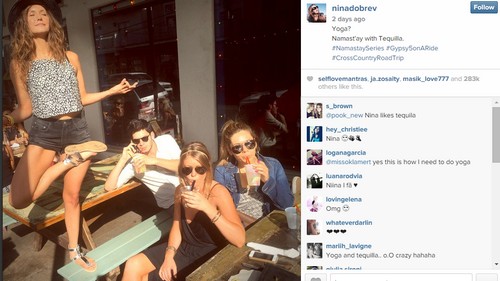