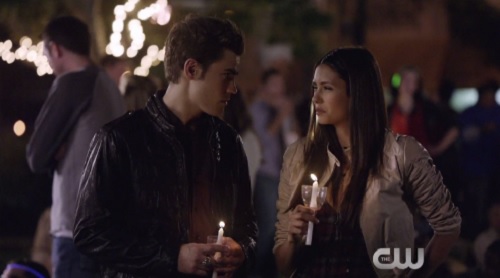 The Vampire Diaries Season 6 finale spoilers reveal that Elena is dead, a not-so-surprising situation knowing that Nina Dobrev made the decision to retire from TVD! If you watched Thursday’s penultimate episode of Season 6 of The Vampire Diaries, you saw that Kai (Chris Wood) stabbed his sister Jo (Jodi Lynn O’Keefe) right before she said “I do” with her honey Alaric (Matthew Davis). As dramatic as that was, it’s not the biggest cliffhanger – even though he may have killed her gestating twins. The really big deal was that when Kai used his magic to blow up the altar and the windows, a now human Elena (Nina Dobrev) was blown back with the force of magic followed by shards of glass.

This has everyone wondering, is Elena dead? Yes! Yes, she is! Nina Dobrev wanted her exit from The Vampire Diaries to be epic and permanent. Of course, while few deaths in the TVD supernatural canon are permanent, this one will be. Since Elena took the only known dose of the vampirism cure, so she’s 100% human. Not only that, she can’t be turned into a wolf, vampire, zombie, witch, etc. Although Kai wasn’t specifically coming for Elena (and may not have even known she was human), he killed her…

The last episode of season six will be an homage to Elena and to Dobrev’s time on the show. We’ll see her wavering around on the other side, maybe hanging out with her dead parents, dead aunt, and all the many other dead people she’s known. Damon (Ian Somerhalder) will hold her and cry, but it’s too late. He can’t even use her blood to become human himself now, just in case he wants to throw himself on the proverbial sword in his grief.

Importantly, both Somerhalder and Paul Wesley (Stefan) have signed on for a seventh season of Vampire Diaries. There is zero chance that Dobrev will be back, though, at any point. She is done with the show for good and not because of better opportunities elsewhere. It’s all about her failed romance with Somerhalder. Dobrev and Somerhalder dated for three years without taking it to the next step. They broke up in 2013 and what’s strange is that he and Dobrev used to double date with Somerhalder’s new wife Nikki Reed and her then-hubby Paul McDonald.

About a year after Dobrev and Somerhalder split, Reed was getting a divorce and she and the Vampire Diaries hottie got hot and heavy really fast. Just six months into their relationship, Somerhalder popped the question. Their fast engagement had to chafe at Dobrev who couldn’t lock the blue eyed hunk down during their three year romance. Even more surprising is that it wasn’t a long engagement and Reed and Somerhalder said “I do” in late April of this year. They also bought horses together and started a production company.

Even prior to their nuptials, Nikki had moved to Atlanta to be with Somerhalder and was a fixture on the TVD set for quite a while. But when the tension between Dobrev and Somerhalder got to be too much, Reed began avoiding the set when Dobrev was around. The bottom line: Dobrev couldn’t deal with seeing Somerhalder’s happy wife and happy life anymore and quit the show over it. The show should be fine without her – there are enough ancillary characters to keep the story going.

And, really, Elena has done everything. She’s been there, bit that, doppelganger-ed, and come back from death more than once. But not this time. Next season, my prediction is that we can look forward to Kai and the vampire-witch hybrids under Lily’s rule acting as the “big bad” and Damon will strike out on a quest for vengeance against Kai for killing off his honey. Stefan may even help out and we’ll enjoy brotherly bonding as they go revenge crazy.

Say goodbye…before it’s too late. Don’t miss @ninadobrev in the season finale of #TVD next Thursday at 8/7c. https://t.co/fF0M7G74iM