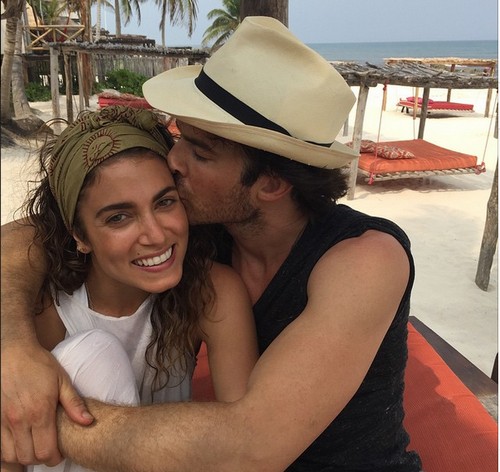 See, People Magazine has this ‘exclusive’ [thank you, Nikki and Ian] about their ‘steamy’ honeymoon, and I beg the question – why did we need to know about this? Sure, they could have mentioned that they went on a honeymoon and a few details of said honeymoon, fine. But to mention that it was ‘steamy’? It either seems like they’re trying too hard to make it seem like they’re happily in love [I don’t know who they’re trying to convince with that one], or they’re clearly trying to rub it into their exes faces – and in this case, that would be primarily Nina Dobrev.

A ‘source’ told People Magazine that the newlyweds first went to Mexico, adding, “They enjoyed the beach and the ocean. They also went on several adventurous outings near their hotel. They seemed to have a great honeymoon.”

A different ‘source’ claims to have spotted the couple having dinner and also mentioned, “They were kissing nonstop! They looked very happy. They are over the moon to finally be married.”

We know who all these sources are, right? Nikki Reed and Ian Somerhalder are working overtime to make their relationship look ‘steamy’, which begs the question – are they faking it? Or are they just really, really trying to rub it in Nina Dobrev’s face and make her jealous?