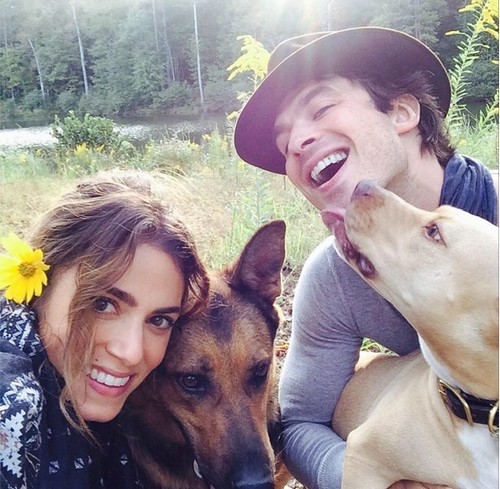 Nina Dobrev has reportedly banned Nikki Reed from visiting Ian Somerhalder and slobbering PDA all over the set of The Vampire Diaries, which is undoubtedly what Nikki and Ian would do. For those who don’t know what this is about, here’s a brief history about the crazy love triangle that is Nina Dobrev, Ian Somerhalder, and Nikki Reed.

Nina and Ian used to date for a few years, but they broke up a while back over personal differences [although there’s different versions of their breakup out there]. Nina almost immediately went into a rebound relationship with Derek Hough, and has since been linked to almost every eligible bachelor in Hollywood. However, Ian has stayed nearly celibate since the breakup, or at least, he’s made sure to keep his private life out of the public eye – until now. Now that Ian Somerhalder dating Nikki Reed has gone public, Ian feels no compunctions to hide his relationship any more. He’s showing off Nikki every chance he gets and shouting his love for her on Twitter, on Instagram, on Facebook, in interviews, and on the set of The Vampire Diaries. All this time, he’s not stopped to consider what it’s like for his ex-girlfriend, who he still WORKS with.

A recent report even suggested, “Ian and Nikki’s relationship is causing a lot of drama, to the point where the producers have asked Ian not to bring Nikki to set when Nina is there because they are very worried about losing her.”

We’ve been calling this from a mile away, but I don’t think Nina Dobrev quitting the Vampire Diaries makes complete sense right now. There’s only a season left until the end of their contracts, and with falling ratings and fans jumping ship to other shows, I don’t see how The Vampire Diaries is going to get renewed for more than one extra season. There won’t be any reason for Nina to quit, so she’ll just have to grin and bear it until then.