The Vampire Diaries Season 6 Spoilers: Damon and Elena Get Back Together – Ian Somerhalder Hints at Reconciliation 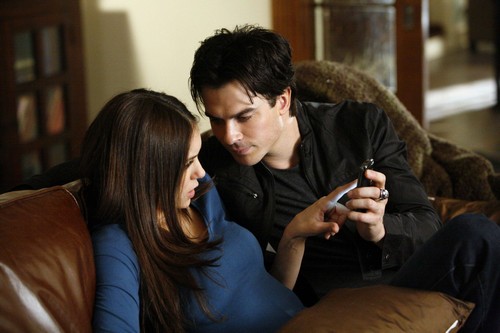 The Vampire Diaries season 6 spoilers have some good news for Nina Dobrev and Ian Somerhalder romance fans, you don’t have to give up on Delena just yet. Even though Elena Gilbert [Nina Dobrev] and Stefan Salvatore [Paul Wesley] seem like they’re getting closer during Season 6, Ian Somerhalder shared a few tidbits about the rest of the season that will have Delena fans satisfied.

In an interview with Entertainment Weekly, Ian explains that seeing Elena again is his first priority, adding, “He’ll go through every length to make that happen. It’s a driving force in his life. Damon doesn’t give a shi-t about very much except his home, his brother, and his girl.”

And what will happen when he gets back, and sees ‘his girl’ with his brother? I don’t think we’ll see a return to the Season 1/Season 2 pining that Damon had for Elena, especially after the way their relationship has progressed since those early days. However, Damon is still stuck on the ‘other’ side with Bonnie, and right now, things aren’t looking too great for them. Sure, Bonnie’s a powerful witch and Damon’s still got his wits about him, but that doesn’t mean returning from that netherworld will be easy. As Ian explains, “He’s pissed off. They’re stuck in a place they don’t want to be, and Damon’s fiercely loyal. He feels the need to get back to his family. They’re trying everything. They’re Scooby-Doo-ing that sh– like crazy.”

What do you guys think about a possible ‘Delena’ reunion? Do you want to see Elena back with Stefan, or do you prefer seeing Damon and Elena together? Let us know your thoughts in the comments below.