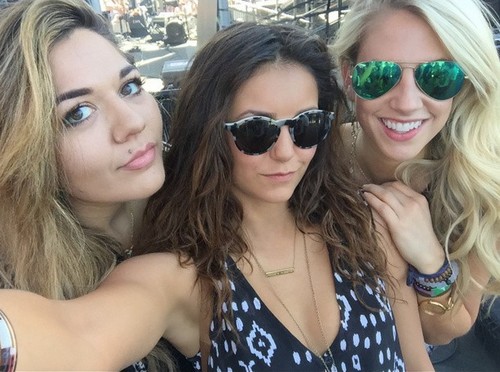 Nina Dobrev announced to the whole world that she was quitting The Vampire Diaries, but she probably should have waited a little bit longer before getting rid of her steady paycheck. According to our sources, Nina’s having a slightly difficult time launching her movie career, in part because of the competition and in part because people still associate her with Elena Gilbert on The Vampire Diaries.

Plus, Nina Dobrev hasn’t really had a breakout film role that will ‘launch’ her in the film industry, and that makes it doubly difficult to land any high-profile film roles. Thus far, the only major films that Nina’s known for are The Perks of Being A Wallflower and Let’s Be Cops – and she had a very minor role in the former and she played the love interest in the latter.

So yes, producers and executives don’t really have anything other than The Vampire Diaries to judge her acting abilities. And while her acting on that show was significantly better than most of the other actors, it still wasn’t really on the level of A-list film actors. She has the looks, and she might have the untapped potential, but she has done nothing to prove it yet.

The good news is that she has a great team behind her, but the bad news is that there’s no guarantee that she’ll have a successful film career – and that the highlight of her career might be The Vampire Diaries. In fact, we’re hearing that she might even regret quitting the show, since she’s having such a difficult time launching her movie career.

What do you guys think? Is Nina Dobrev regretting her decision to quit the Vampire Diaries, and do you think she’ll manage to launch a successful movie career? Let us know your thoughts in the comments below.