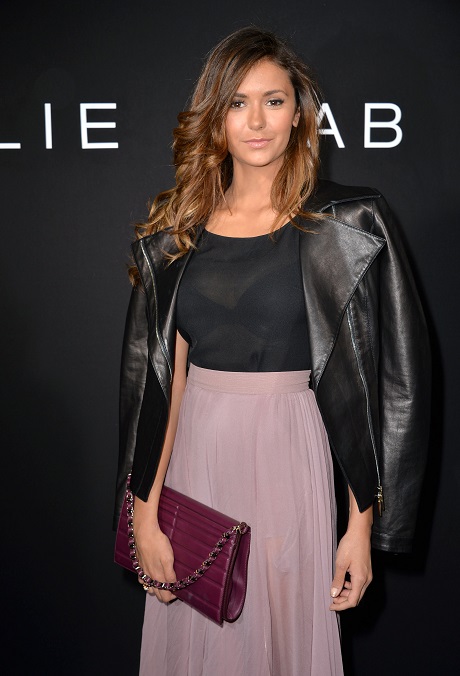 Nina Dobrev is certainly not shy, as evidenced by her topless scene in the trailer for Let’s Be Cops. The trailer came out a few months ago, with Nina’s stripping making headlines all over the world. However, sources now tell us that following Nina’s reunion with ex-boyfriend Ian Somerhalder, Nina’s vowed not to do any more nudity or stripping scenes.

Apparently, Ian was furious about the topless scene, but since he and Nina were still broken up at the time, he couldn’t say anything. But since they went back to their on-again/off-again relationship, he’s been hounding Nina about avoiding topless scenes and even kissing/sex scenes if she can help it. If he was so upset about Nina hooking up with other men, I can see how that topless scene might have driven him over the edge.

Understandably, Ian doesn’t want Nina to have to take off her clothes for movie roles, but it’s an extremely competitive business these days. If we’re being brutally honest, Nina doesn’t have the acting chops to be considered for leading roles in the same league as Jennifer Lawrence, Emma Stone, Shailene Woodley, Mia Wasikowska, and even Emma Watson. She has a strong fan base from the Vampire Diaries, and she does a great job playing the dueling roles on that show. But she’s not at the point where she’s winning awards or critical raves for her acting, and the alternative is roles in movies like Let’s Be Cops.

It’s a choice – does she continue taking those roles to further her movie career, or does she listen to Ian and just stick to television? Nina’s impossibly pretty, which has no doubt helped her career in every way. However, she’s still not getting the same amount of opportunities as Ian, despite their acting being on the same level. Unfortunately, Hollywood always discriminates against women in lead roles, and Ian knows that. And knowing that, he doesn’t want his girlfriend to succumb to the pressure, especially if that pressure involves going topless in a movie.