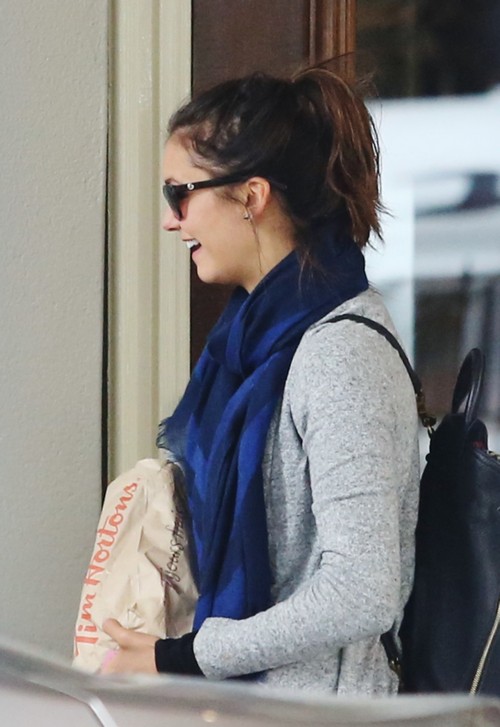 Ian Somerhalder isn’t shy why it comes to talking about Nina Dobrev leaving ‘The Vampire Diaries. In fact, Somerhalder confessed relief that Dobrev quit TVD. Tensions were probably running high after Nina dumped Ian, but things were even more heated when Somerhalder married Nikki Reed after a quickie engagement. Now that Nina is gone, so is the stress, but it appears Ian is more focused on enjoying all of the TVD spotlight without Dobrev around.

Fans were desperate to know how ‘The Vampire Diaries’ would survive without Nina Dobrev’s character, Elena. Nina quit the show, leaving her character in an eternal slumber and everyone worried that without the Elena and Damon factor, the show wouldn’t survive. Ian was one of those people, but the TVD star is enjoying the focus on his character.

Somerhalder told Variety. “What we’ve just started shooting is such a departure (from what is expected of the show). I just started shooting episode 10, which is a concept episode. The episode was really about Damon, but that’s not why I think it was the best at all. The way the story was put together … every artisan from set to producers to wardrobe to everyone was just so on-point.”

While Ian praised everyone’s work in a great effort to appear humble and appreciative, it’s pretty clear Somerhalder likes the new focus and attention on his character. Nikki Reed has been pushing Ian to take on bigger projects; possibly trying to convince him to quit ‘The Vampire Diaries’ to make the jump to a movie career.

Having the spotlight on his character would help with that. However, there is that pesky rumor Ian Somerhald wants a family. Is that the real reason Nikki wants to distract Ian with a career-move?

One factor is clear – Ian Somerhalder is relieved Nina Dobrev quit ‘The Vampire Diaries.’ Nikki Reed is satisfied the threat of Ian and Nina rekindling their romance is gone, and Somerhalder gets more screen time. It’s a win-win for Ian.

Don’t forget to keep checking out CDL for more gossip and news on Ian Somerhalder, Nikki Reed, and Nina Dobrev!