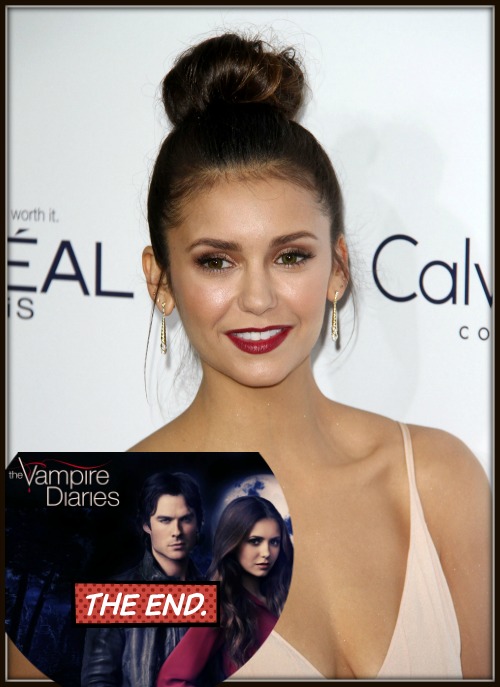 Nina Dobrev has finally scored new roles after quitting ‘The Vampire Diaries’ and enjoying time with her new boyfriend, Austin Stowell. After weeks of denying she will return to TVD, Dobrev’s upcoming projects have debunked her rumored return to TVD. Does that mean Ian Somerhalder is bummed?

Nina left the role of Elena Gilbert, but that hasn’t stopped the cast from teasing her possible return. Several media outlets have spun the subject when interviewing TVD stars regarding the subject of Elena. Dobrev’s return rumors reheated after Paul Wesley told TV Insider, “Elena’s still a very big part of the story. Her body’s in danger in the first few episodes, and Damon is doing everything he can to make sure it stays safe if and when she wakes up. We all had imagined this complete reboot where Elena was gone, but she’s talked about so much!”

Some outlets even claimed Ian was “exited” to have Nina Dobrev back on set. That is hardly likely. The last few weeks of filming were reportedly awkward and somewhat tense as Nikki Reed watched Ian Somerhalder’s scene with Nina like a hawk. It’s hardly likely Ian would be excited for another round of the Nina Dobrev/Ian Somerhalder/Nikki Reed love triangle, let alone be bummed Nina isn’t returning. In fact, Ian and Nikki were noticeably absent for the Teen Choice Awards in which Dobrev and Somerhalder won an award for their onscreen kiss.

Nina is set to star in ‘Arrivals’ with Maisie Williams from ‘Game of Thrones’ due out in 2016. The film, about a girl who enlists the help of a hypochondriac baggage handler to help her carry out her bucket list, is currently in pre-production. In addition to nabbing the role of Izzy in the Peter Hutchings project, Dobrev is said to be the hot choice for the role of Allie on CW’s revamp of ‘The Notebook.’ That means Nina is going to have very little time to return to the role of Elena.

Nina has also stated pretty clearly on multiple occasions she won’t be returning to ‘The Vampire Diaries’ despite some fans holding onto hope. Recently, she told EW that chapter is “closed” and her speech the 2015 Teen Choice Awards essentially put the final nail in that coffin.

What do you think of Nina Dobrev’s upcoming film projects? What will the CW do with Elena now that it’s obvious Nina won’t return? Let us know your thoughts in the comment section below.