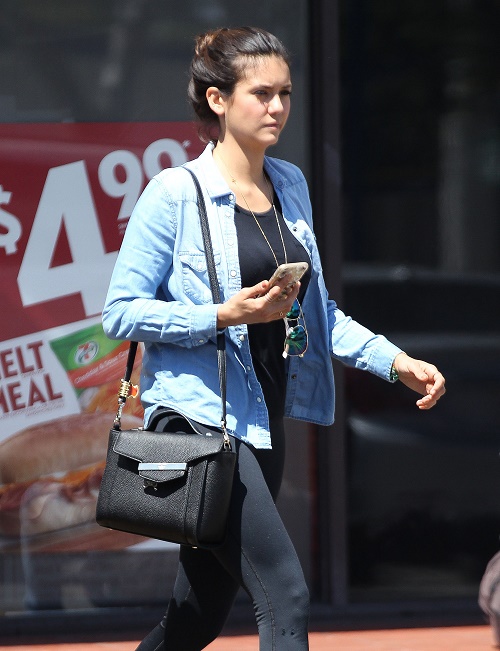 Nina Dobrev was offered a return role on the CW show after her career stalled, but Dobrev refuses to work with Ian Somerhalder on ‘The Vampire Diaries.’ Instead of crawling back to TVD and her love triangle with Ian and Nikki Reed, Nina is using her celebrity friends to promote herself for movie roles.

The CW kept Nina’s role as Elena on ‘The Vampire Diaries’ open for Dobrev, so she could make a return. As CDL reported, producers knew Nina would get a reality check and discover that it isn’t easy to make the transition from television star to movie star, and cashed in the possibility Dobrev and her character would come back to TVD. Fellow cast members Kat Graham, Candice Accola, Paul Wesley, Michael Malarkey, and even Ian Somerhalder all teased a possible return of Nina Dobrev’s character, Elena, at Comic-Con in San Diego. Nina’s ex, Somerhalder, led the charge in answering the question of the possibility of Nina’s return teasing that it could totally happen.

Dobrev likely took the tease as a slap in the face, as it insinuates Nina would eventually come crawling back to the show because she can’t score any other roles. So far, Nina Dobrev’s career hasn’t taken off, but when the CW offered her a return to ‘The Vampire Diaries,’ she refused. Who could blame her for refusing to work with her ex-boyfriend who dumped her for her friend, Nikki Reed, and then proceeds to indulge in childish behavior like unfollowing her on Twitter?

In the days after her departure from TVD, Nina has been seen partying and rubbing elbows with celebrity friends including Leonardo DiCaprio. On Saturday, August 22, Dobrev made sure she was photographed attending Taylor Swift’s sold out concert in Los Angeles. Nina met up with Maria Menounos to pose for cameras and blow kisses, making sure she was photographed and tagged with Taylor Swift’s name.

Hollywood is about networking and scoring roles can largely depend on who you know. Using celebrity friends to promote your career is hardly new or scandalous, but Nina is desperate for the career-making role; preferably on film. Dobrev isn’t completely snubbing television, but she is allegedly only willing to consider take roles on hits like ‘Empire’ and ‘True Detective.’

Nina has also been busy trying to prove she has moved on from Ian with Austin Stowell. The two haven’t been shy in PDA-packed pictures and plenty of photo opportunities for paparazzi. Their St. Tropez trip gave Dobrev the perfect excuse to wear an assortment of bikinis and flaunt her romance with Stowell.

What do you think of Nina Dobrev refusing to work with Ian Somerhalder? Is she really using her celebrity friends to promote herself for movie rolls? Let us know what you think in the comment section below. What do you think? Will “Nina Dobrev” & “movie career” ever go hand-in-hand?