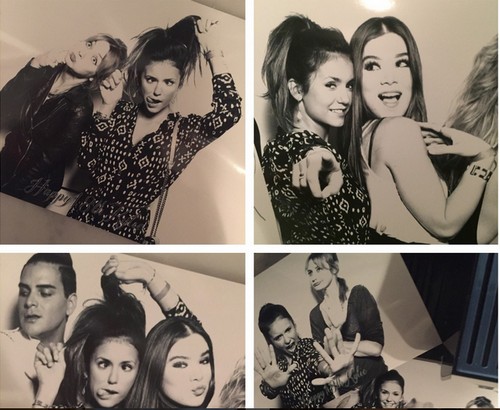 Trying to launch her career in a new direction is proving to be a challenge, and Nina Dobrev is now desperate for work, fearing a career failure will send her back to TVD and the Ian Somerhalder, Nikki Reed love triangle. Nina Dobrev has been celebrating her departure from ‘The Vampire Diaries’ with nonstop partying, vacations, and plenty of PDA with her new boyfriend, Austin Stowell but the party is over!

Nina has claimed that there is no bad blood or jealousy after she and Ian broke up. However, Somerhalder immediately found comfort in Dobrev’s friend, Nikki Reed. Ian and Nikki were soon inseparable and married after nearly 9 months of dating; flaunting their love in Nina’s face. According to rumors, Reed was even on set for Somerhalder and Dobrev’s final scenes, watching them both like a hawk. That had to be uncomfortable!

Dobrev ended her 6 season run with the CW show, and submersed herself in friends and partying. Most recently, the former TVD star spent time drinking and hanging out with famous pals in France. A portion of the St. Tropez trip was also dedicated to showing off her bikini bod with Austin Stowell. At one point, Nina straddled the ‘Whiplash’ star, giving paparazzi something to snap at. Meanwhile, her career hasn’t exactly taken off post-Vampire Diaries.

Dobrev hasn’t had anything notable since leaving ‘The Vampire Diaries’ and lost a few roles she had her eye on. According to Hollywood Life, Nina is now desperate for a role on ‘True Detective.’ Working with Matthew McConaughey and Colin Farrell would be great for her resume, but as the site points out – everyone in Hollywood wants a part on the show.

If her attempt at a post-TVD career doesn’t work out, Nina could always return to ‘The Vampire Diaries.’ Thanks to the way CW ended TVD, it is possible for Dobrev to bring Elena back from her eternal slumber. CW president Mark Pedowitz also told reporters at a Television Critics Association, “We would have loved Nina to stay. She did a great job for the six years she was on the show. She is welcome back any time she wants to come back.”

As CDL has stated, it’s highly unlikely Nina Dobrev would return to ‘The Vampire Diaries’ anytime soon. Going back to the show would be admitting failure and returning to the drama of the never-ending love triangle with her ex-boyfriend, Ian Somerhalder and former friend, Nikki Reed. It would be a lateral move, if not a step backward.

What do you think of Nina Dobrev’s attempt at a career after TVD? Should she have stayed on the show? Let us know your thoughts in the comment section below.