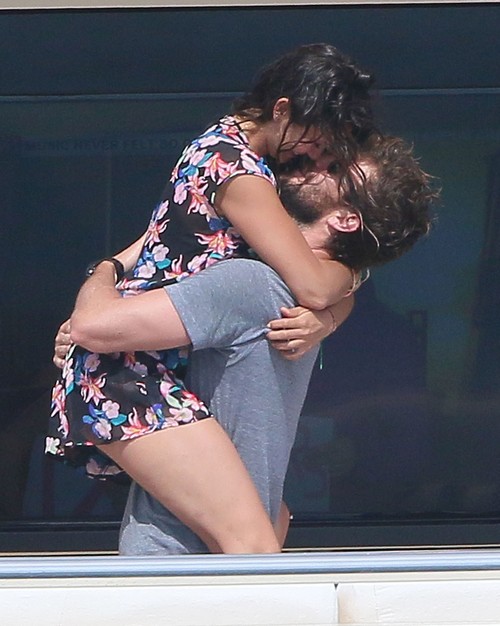 Nikki Reed may be behind Ian Somerhalder’s recent social media snub of his ex-girlfriend, but she might have good reason to worry. Nina Dobrev’s former castmates have hinted at Nina’s return to ‘The Vampire Diaries’ as Elena, and that would mean a reunion with Ian Somerhalder.

This weekend, Nina had a mini-reunion with her ‘Vampire Diaries’ co-stars Candice Accola and Kayla Ewell at Kayla’s bachelorette party. The girls of TVD looked like they had a great time, and their friendship is still strong. Nina, Candice, and Kayla all posed for several photos, which Dobrev shared via Instagram. Clearly, there is no bad blood between the girls, who snapped several pics together while smiling and embracing.

Nina definitely hasn’t been shy after her break up with Ian Somerhalder and departure from ‘Vampire Diaries.’ The 26-year-old actress has been partying, practically non-stop, since she left her role as Elena. Friends have started to worry Nina is partying too hard; drinking her cares away as her career seems to have stalled post-TVD. However, her love life seems to be smoking-hot. Dobrev and her 30-year-old boyfriend, Austin Stowell, were photographed enjoying a PDA-filled vacation in St. Tropez. The duo smiled for looming photographers, and didn’t hold back on the romance. Nina wrapped her legs around her new boyfriend, kissing him without restraint.

Dobrev and Stowell’s flashy getaway came shortly after Ian unfollowed Nina on Twitter. The middle school mean girl move didn’t go unnoticed, and media pounced on the social media snub. Maybe Nikki Reed isn’t convinced Nina and Austin are as in love as they appear to be and feels threatened? A Nina Dobrev and Ian Somerhalder reunion isn’t out of the question. The cast of TVD teased a return of Dobrev’s character at San Diego Comic Con, Ian leading the tease stating, “She’s still there, dude. She’s in a casket; she’s having a nap.” Fellow co-star Paul Wesley added, “[Characters] die and come back. It’s like Jesus!” However, Candice Accola took it to a serious level saying, “I think that’s what’s fun about this series. You never know when characters are going to leave, you never know when they’re going to come back. That’s been a constant for six seasons, now. So the fact that, for such a big departure, that it is left open-ended, is really true to the show.”

We all know Dobrev’s return to ‘The Vampire Diaries’ would NOT be welcomed by Ian Somerhalder’s wife, Nikki Reed. There has been strong evidence of bad blood between Nina and Nikki. If Nina returned to ‘Vampire Diaries,’ you can bet Reed would not happy about it. Judging by the cast members teasing the return, Dobrev’s current career lull, and how well she gets along with her former co-stars, Nikki might be afraid Nina will swoop in for a reunion. It would threaten Reed’s relationship with Ian and steal the spotlight.

What do you think of Nina Dobrev and Ian Somerhalder’s possible reunion? Will Nina return to TVD? Will Nikki Reed try and stop Dobrev’s return? Let us know in the comment section below!

Former “The Vampire Diaries” star Nina Dobrev and her boyfriend Austin Stowell pack on the PDA while yachting in Monaco, France on July 26, 2015. Nina and Austin couldn’t keep their hands off of each other while enjoying a day swimming and jet-skiing. FameFlynet