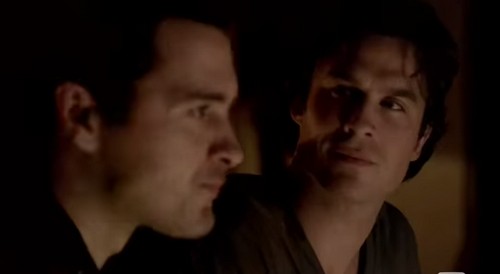 If you Thought TVD Season 6 was dark in Mystic Falls? Wait until you see these ‘The Vampire Diaries’ spoilers for Season 7. Kai Parker (Chris Wood) was a worthy adversary for last season, rivaling the intense cruelty and awesome power of former TVD big bad Klaus Mikaelson (Joseph Morgan). One was an all-powerful witch, one a hybrid vampire/wolf, but they’ve got nothing on the epic baddies coming our way this season.

The Heretics are a family of vampire/witch hybrids under the command of Lily Salvatore (Annie Wersching) that are fresh out of a time portal prison and eager to make trouble. Remember the flash forward scene at the end of season six where Damon Salvatore (Ian Somerhalder) surveyed a totally trashed and ravaged Mystic Falls from his perch on the clock tower? That’s the work of his out of control mom and her adopted family of magic-using, blood-drinking freaks.

The Heretics will be the primary trouble makers that plague our band of reluctant heroes in Season 7 and that will unite the fractured friends into an alliance to fight them off. Technically, the group is referred to as siphoner/vampire hybrids and all but Lily, who is simply a vampire, came from the Gemini Coven – the same group that spawned the evil Kai and the whole twinning power thing. Siphoners steal magic from other witches, as did Kai, and as a result, were exiled by the Geminis.

Then they met Ripper Lily who turned them all and created a dark family to replace the ones she lost when she left Stefan Salvatore (Paul Wesley) and Damon with their dad after she herself was turned. Siphoners are able to channel their own vampire magic which makes them terrifyingly powerful. The Heretics tried to destroy the Gemini Coven back in 1903 but were banished to the time prison instead.

Freed by Kai, the Heretics are now free to make trouble. Executive Producer Caroline Dries says, “the challenge for the writers is constantly topping the villain from the previous year. Kai is one of the best villains we’ve ever had on the show. By bringing in Lily’s family, it’s these six villains who can do magic — and they’re vampires. It’s going to be exciting and gruesome and violent.” Can’t wait!

And three of the Heretics are some serious female power players, two of which are in a same-sex relationship bringing some spice to Mystic Falls. Elizabeth Blackmore (from the recent reboot of Evil Dead) will play Valerie, who possesses “powerful magic and a dark and moody attitude.” Valerie doesn’t like small town they’ve landed in and will set off a “dangerous chain of events that will change the face of Mystic Falls.” So maybe it’s Val that’s responsible for the whacked out city we saw.

Scarlett Byrne (from TNT’s Falling Skies) will play tomboy Nora who has a snarky sense of humor and is the significant other of Teressa Liane’s (an Aussie TV star) Mary Louise. They are a dark power couple who like to create chaos and Mary Louise is an opinionated bad ass wildling with bravado and absolutely no filter. Byrne was also part of the Harry Potter cast playing Pansy Parkinson. There’s also a Heretic named Malcolm, but the other two clan members are a question mark as yet.

What’s also interesting about the Heretics is that they seem to violate the TVD canon rules that you can’t be both vampire and witch – that’s been a subject of much consternation on last season of TVD spinoff The Originals. Perhaps because they couldn’t do magic unless they siphoned, they were immune to this rule? Comments are already swirling on message boards decrying this perceived break from the rules, but surely the showrunners will explain it away…

The plan is that the Heretics will use Mystic Falls as their proving grounds while they try to assimilate into the new world. Remember, they’ve been in time prison for 112 years, so that can make life awkward. The group needs to learn how to use the internet, take selfies and properly order a complex coffee drink from an uppity barista if they want to fit into our world. Before being trapped by the Coven, the Heretics are rumored to have killed thousands of innocents, so how will Mystic Falls fare?

Damon, Stefan, Caroline Forbes (Candice Accola), Bonnie Bennett (Kat Graham), Matt Donovan (Zach Roerig), and Alaric Saltzman (Matt Davis) will battle the Heretics. Spoilers indicate that Mary Louise and Nora are old-school mean girls who decided to torment Caroline, who enjoys taking these two bitchy bad girls on as a distraction from her grief over losing her mom and then Elena right after each other. Look for Alaric to be especially vengeful now that he lost Jo and their twins.

And a big question is which side Enzo (Michael Malarkey) will land on. His supernatural sire Lily wants him to be part of their family but Enzo may have had enough of killing and spurn them. And Damon is Enzo’s BFF, but the other Mystic Fallians aren’t so terribly fond of Enzo. Malarkey said of Enzo’s dilemma, “It’s about choosing his allegiance. Does he go with Lily and the Heretics or does he side with Damon? It’s a struggle for him.”

What’s great for The Vampire Diaries fans is it looks like a season that will be action-packed and well-written and will have us wondering “Elena who?” Sure she’ll be referenced here and there, but it’s clear the show will go on without her and will go well. Season 7 has great love stories to see with Stefan and Caroline – and perhaps something between Bonnie and Damon. And now we know the villains may be some of the biggest and baddest big bads that’s we’ve ever seen on #TVD.

Season 7 begins Thursday, October 8 on The CW. Come back to CDL every Thursday this Fall for live recaps during the show and “Vampire Diaries” spoilers and news all season long!