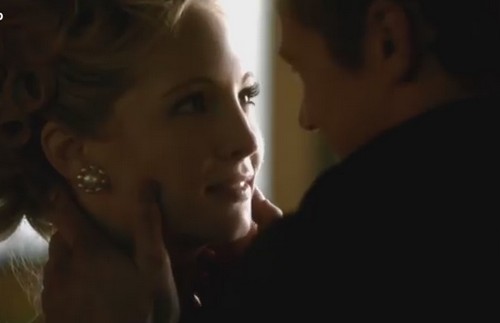 The Vampire Diaries season 7 spoilers tell us now that Elena Gilbert (Nina Dobrev) is in her 70 year sleep cycle, Stefan Salvatore (Paul Wesley) is free to indulge himself with Caroline Forbes (Candice Accola) – free of Elena and the rivalry with Damon over her love. Here are some “Vampire Diaries” spoilers for Season 7 and how Mystic Falls’ latest power couple “Steroline” will heat things up with some yummy vampire sexiness.

At Comic-Con last week, The Vampire Diaries executive producer Julie Plec says Stefan and Caroline will experience “a lot of very unexpected twists and turns” as they explore their new relationship. Plec says, “The fun of this couple is that they’re just getting cemented in their romantic status.” You’ll recall at the end of Season Six, Stefan told Caroline, “I will be here when you’re ready.”

Thing is Caroline isn’t sure she just wants to be ready. Caroline is fresh off losing her mom, losing and then regaining her humanity, getting BFF Bonnie Bennett (Kat Graham) back from the other side, then losing other BFF Elena to a cursed slumber thanks to Kai Parker (Chris Wood). That’s a lot for a girl to go through. Plus, Caroline made Stefan turn off his humanity and they killed a bunch of people.

That’s a big pile of baggage to bring into any relationship, much less a new and fragile one. But, the good news is that showrunner Plec has said there will be lots of Stefan eye candy promising “shirtless stuff every episode.” That’s good for Caroline (and for all of us watching). Paul Wesley says of Caroline’s pull toward Stefan, “She can’t resist.”

Wesley also said, “I do like the fact there is so much history between the two characters. I really like Steroline.” And Caroline portrayer Accola is equally enthusiastic saying, “I love a good slow-burn relationship in a television series. I like the characters together.” But don’t think there will be I love you’s right away. They won’t get together right away, but will come together gradually.

There will be some obstacles, but other #TVD exec producer Caroline Dries says the Stefan and Caroline relationship will turn into a “huge, epic love story.” Caroline will still be reeling from the death of her mom and will turn to Stefan for support, but first as just a friend. But then she won’t be able to deny her feeling for him and things will heat up – seriously heat up, like to scorching levels.

What’s also interesting is that the last episode of Season 6 showed us a flash forward into a dark time in Mystic Falls. Prior seasons, however, have seen lots of flashbacks to the past and Stefan and Damon’s long years of existence. But Season 7 will show us more flash forwards into the future where we see a very happy Caroline and Stefan – so we know that there are good times in store for Steroline.

All this steamy romance is great, but there was one Mystic Falls resident who sure didn’t like the love – Season 6 villain Kai! At The Vampire Diaries Comic-Con panel, Kai aka Chris Wood showed this “fan video” he made. It’s worth watching the whole six minutes, but if you’re short on time, skip to 2:10 and then 5:08. You DO NOT want to miss Kai making out with Damon – seriously…

Season 7 of “The Vampire Diaries” premieres Thursday, October 8 on The CW. Be sure to check with CDL for live recaps all season long plus tons more “Vampire Diaries” spoilers, news and gossip!