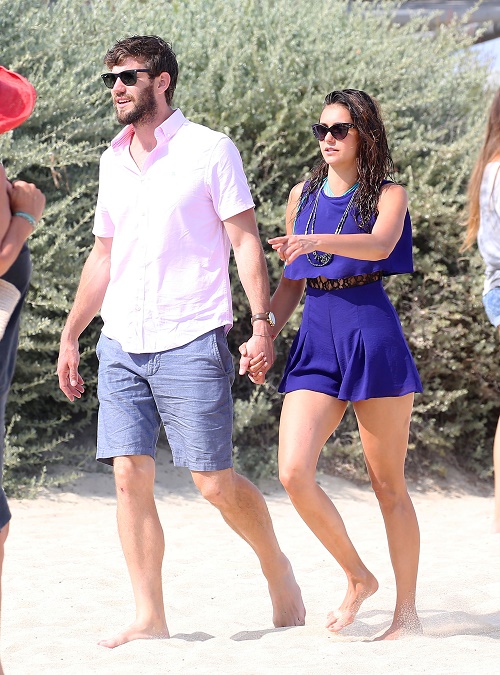 Nikki Reed and Ian Somerhalder are in love and take every photo opportunity to remind the world of their sickeningly-sweet relationship. All those PDA-filled photo ops and rumors of Nikki and Ian’s pregnancy plans undoubtedly still upset Ian’s former girlfriend, Nina Dobrev, who appears to be drinking her career and love life woes away. Is Somerhalder tempted to reach out to Dobrev after her non-stop partying worries her ex?

The drama between Ian Somerhalder, Nina Dobrev, and Nikki Reed is never-ending. Nina insists everything is peachy between them, but it is evident that she is trying to drown her sorrows with endless partying. After exiting ‘The Vampire Diaries,’ Dobrev has been rumored to be struggling with her career. On top of Nina’s hunt for role that will branch her career beyond the teenage vampire drama, Nikki and Ian are reportedly making pregnancy plans. Reed and Somerhalder love to flaunt their relationship with unrestrained PDA, which often steals the spotlight, and a baby would only intensify Ian and Nikki’s presence.

Nina started by celebrating her departure from ‘The Vampire Diaries’ by partying at Coachella. Fair enough, but the drinking and celebrating didn’t stop there. Dobrev’s drinking has continued and friends described it as “nonstop” and they are getting worried. “She hasn’t even tried to look for work in weeks,” a pal revealed. “It seems like all she wants to do is party these days, it’s obvious that she is using it as a coping mechanism for something.”

Nina just spent a night out on the French Riviera, partying with fellow celebs like Irina Shayk, Michelle Rodriguez, and Orlando Bloom. The former TVD star spent the night drinking and hanging out with some famous pals at the Leonardo DiCaprio Foundation party. It was just one of the multiple nights of booze and fun during Nina’s Saint Tropez trip.

Does all this partying, drinking, and rumored “downward spiral” have Ian Somerhalder worried? Maybe. While Ian is married and seems happily in love with Nikki Reed, Somerhalder and Dobrev were together for years. Nina also claimed she and Ian still maintained a friendship after their break up, going as far as claiming she still loved him and asserted the friendship was “still strong” during an interview in June.

However, Ian caused a stir when he unfollowed Nina on Twitter a few weeks ago. There may be a million reasons he cut ties with Dobrev via social media. Jealousy over her blooming relationship with Austin Stowell was a repeated theory, but Nikki dominating Ian’s life won the popular vote. Either way, this shows some sort of feelings for Nina – good or bad.

Will Ian Somerhalder reach out to Nina Dobrev? Would Nikki Reed allow her husband to help an ex-girlfriend? Let us know what you think in the comment section below.

Former “The Vampire Diaries” star Nina Dobrev and her boyfriend Austin Stowell seen boarding the ‘My Ecstasea’ yacht in Monaco, France on July 25, 2015. Nina looked to be in high spirits despite rumors that she’s been depressed since her exit from her former TV series