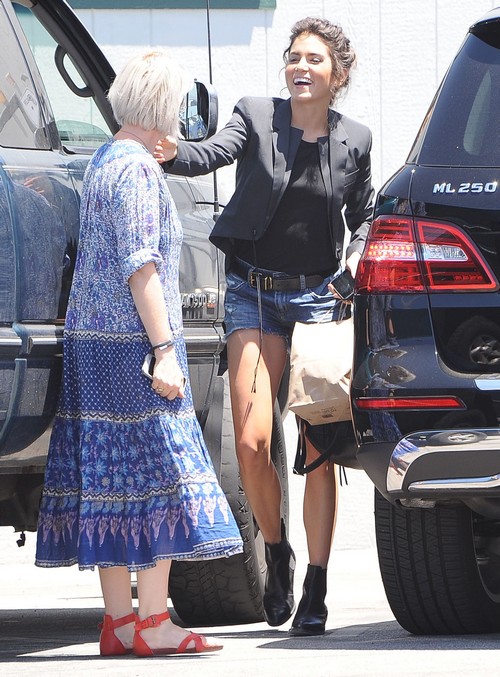 Nikki Reed is starting a new project, joining the cast of ‘Sleepy Hollow.’ However, the ‘Twilight’ star might have even bigger plans as Nikki Reed and Ian Somerhalder’s pregnancy plans still make Nina Dobrev bitter over their baby-making vows.

It all started out with a friendship between Nikki Reed and Nina Dobrev that took a drastic turn when Nina and her boyfriend and ‘Vampire Diaries’ co-star, Ian Somerhalder, split after nearly three years of dating. Reed and Somerhalder then started dating in the summer of 2014. Nikki and Ian’s over the top PDA was flaunted at every red carpet event and even on social media. Obviously, that was all a slap in the face of Nina who still had to work with her ex and his saccharine-sweet relationship with Dobrev’s former friend. Then, after six months of dating, Ian and Nikki were engaged. Ouch.

According to an insider who squealed to Us, Somerhalder and Reed “were attracted to each other” but Ian was with Nina. Perhaps Dobrev was hoping for a reconciliation or a ring at one point, but Nikki and Ian started dating and Somerhalder wasn’t shy about his adoration of Reed, even professing his love via social media stating Nikki is a “magical person doing great things in the world.”

Vexing Nina even further, Nikki Reed and Ian Somerholder pregnancy plans were made public during their wedding vows! According to a source who tattled to various media outlets, “Ian promised Nikki in his wedding vows that he was going to be the best dad ever and that they were going to start ‘the baby-making process’ right away.” Another Ian and Nikki pregnancy rumor stated the couple wanted to get pregnant during their honeymoon, because “it would be a great story to tell their children.”

Nikki and Ian weren’t going to rush into starting a family quite so soon according to Hollywood Life. “Their babies are their animals. They don’t want to add to the family right now. They don’t feel like they rushed into marriage, but if they had kids now, they feel that would actually be a bit of a rush,” the HL source explained. So, either the rumors of a Nikki Reed’s pregnancy plans and Ian’s “baby-making” goals were a heat-of-the-moment thing or a stunt that undoubtedly made Nina very bitter.

Now that Nikki has started a new project, joining the cast of ‘Sleep Hollow’ as Betsy Ross, those baby-making plans are likely on hold. The series co-creator, Len Wiseman, gushed to THR about Reed’s sex appeal and how they hope to tape into that for the show stating, “Nikki’s the perfect choice to bring a smart and sexy edge to our show’s twisted version of American icon, Betsy Ross.” A pregnancy would likely pose a problem with that goal of sexualizing Betsy Ross.