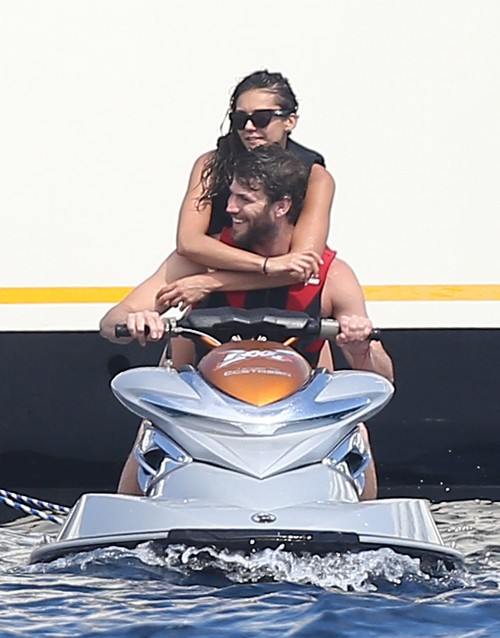 Nina Dobrev and Austin Stowell have been enjoying a PDA-filled romantic vacation in France. Nina has been strutting around in bikinis and flaunting her relationship with her new boyfriend, while looming paparazzi capture the couple’s PDA. Could the over-the-top display be some kind of revenge on Ian Somerhalder… perhaps in response to his recent Twitter snub?

On Sunday, Nina and Austin were photographed kissing and touching each other constantly. The couple put on a passionate display, not seeming to care that photographers were taking pictures. Nina and Austin jumped on some jet skis, and Nina gave the looming paps a thumbs up as she grabbed her new boyfriend, smiling. At one point, Dobrev straddled Stowell, wrapping her arms around him and kissing him. Austin didn’t seem to mind and lifted her close to his chest and smiled as she locked her legs around his waist.

This is the sort of LOOK AT US, WE ARE SO IN LOOOOOVE behavior Nina’s ex-boyfriend, Ian Somerhalder, and her ex-friend, Nikki Reed, typically flaunt for cameras. Since Nikki and Ian hooked up, they haven’t been shy in rubbing their relationship in Nina’s face. Is Dobrev and Stowell’s St. Tropez trip a way of telling Ian and Nikki two can play at this game?

Nina has been partying hard lately. In fact, the former ‘Vampire Diaries’ starlet has been partying so hard her friends are growing concerned for her well-being. Perhaps they are tempted to get Ian involved, because previous rumors we shared on CDL noted that Somerhalder might reach out to his ex. However, with Nikki Reed calling the shots in Ian’s life, the chances of Ian and Nina having any kind of friendship is very slim.

After the tumult of Nina and Ian’s break up, Somerhalder began dating Nikki and quickly became infatuated. Reed and Somerhalder then married, and Dobrev quit TVD. All the while, everyone pretended everything was fine. Nina insisted during several interviews that she and Ian were still friends. However, that wasn’t true and Somerhalder even pulled the ultimate middle school move of unfollowing Dobrev on Twitter.

In response, Nina has been partying with celebrity pals; recently attending a soirée hosted by notorious lady’s man, Leonardo DiCaprio. The photos of Dobrev and Austin Stowell practically humping on their yacht are just one of several PDA-filled public appearances. Nina and Austin also couldn’t keep their hands off each other at the Hallmark Shoebox relaunch in Hollywood a few weeks ago. What do you think of Austin Stowell and Nina Dobrev’s relationship? Was Nikki Reed behind Ian Somerhalder unfollowing Nina on Twitter? Let us know your thoughts in the comment section below.