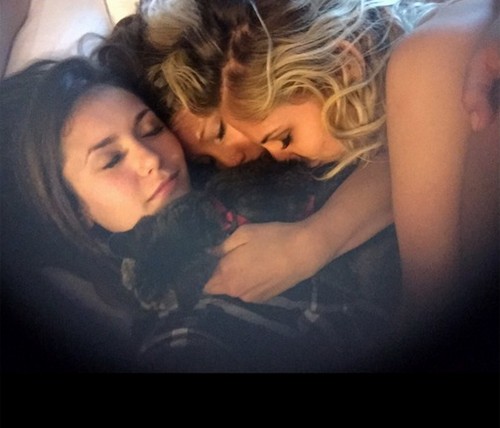 Nina Dobrev is trying to find herself after quitting ‘The Vampire Diaries’ and having the new marriage of her ex-boyfriend, Ian Somerhalder, rubbed in her face. After spending time with her new boyfriend, Nina Dobrev took a break from Austin Stowell, finding comfort in her friends.

The former TVD starlet put on quite a show with Stowell while in France. Nina and Austin smiled for cameras, showing plenty of PDA. While on a yacht in St. Tropez, Dobrev wasn’t shy in wrapping her legs around the ‘Whiplash’ star, kissing him and entwining her arms around his neck. It was clear Nina didn’t mind the attention from Austin…and the looming paparazzi.

After spending time on the French Riviera with her new boyfriend, Nina is taking a break from Stowell and logging in quality time with her friends. Dobrev shared pictures on her Instagram showing off her girlfriend weekend. Nina and her pals spent two days in the company of her closest pals. Dobrev captioned one of the images featuring two blonde buddies cozying up with her and a cat, “Sunday Snuggles with the girls.”

This might be just what Nina needs. The former ‘Vampire Diaries’ star has been partying hard since departing the show. Maybe she is just letting off some steam, or maybe the 26-year-old is just celebrating her freedom. Friends of Dobrev were worried she was burying her feelings and waning career in partying and alcohol, but Nina seems to be in love with Austin…or at least that is what she wants the world to think.

The door is still open for a return to ‘The Vampire Diaries’ if Dobrev’s career doesn’t take off. It’s highly doubtful Nina would want to reprise her role as Elena. It might convey the message she can’t get work outside of the CW show. However, that hasn’t stopped the cast from teasing the possibility.

PR stunt or real love, Austin Stowell and Nina Dobrev are taking a break to spend time with friends and family. It’s good to see Nina taking a break from PDA pics to enjoy some downtime and give Austin a break. It’s a safe bet they will back to kissing and cuddling for looming paparazzi in no time, but for now, Dobrev is enjoying the company of her friends.

What do you think of Nina Dobrev and Austin Stowell’s relationship? Is it a stunt or PR move? Let us know what you think in the comment section below.