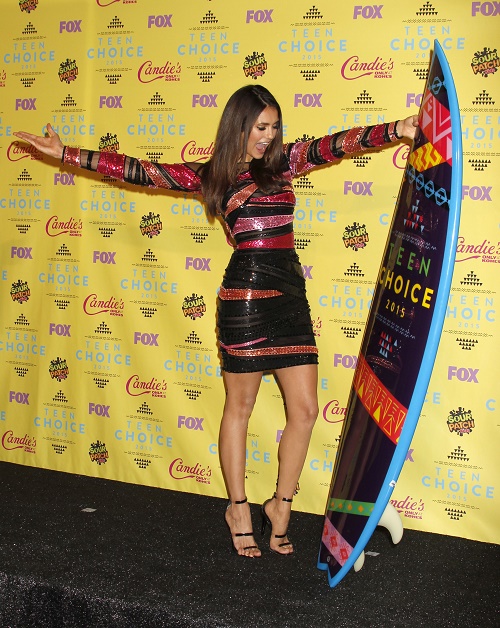 Is Nina Dobrev headed back to the small screen and joining the casts of True Detective and Empire? When Nina Dobrev abandoned the role of Elena Gilbert and quit The CW show The Vampire Diaries, she insisted it had nothing to do with the fact that she didn’t want to work with her ex-boyfriend Ian Somerhalder anymore and claimed that she wanted to pursue a movie career.

Well, months have passed, and Nina Dobrev has not landed a single movie role and it is becoming increasingly clear that landing a major film gig is not as easy as she had thought it would be. Nina believed that producers would be kicking down her door tying to cast her after she quit The Vampire Diaries, but it has been quite the opposite – she isn’t even getting any call backs, and she is rapidly losing all of the buzz that she once had going for herself.

The Vampire Diaries producers knew that it would only be a matter of time before Nina Dobrev realized that the grass wasn’t greener on the other side – which is why they left Elena Gilbert’s exit rather open-ended. The CW reportedly offered Nina her job back on The Vampire Diaries, but Dobrev refused their offer. Despite what she claims, there is some serious bad blood between her and Ian Somerhalder and his new wife, Nikki Reed – the last thing Nina wanted to do was go crawling back to the job that she quit.

So, what is unemployed Nina Dobrev going to do? Sources close to the actress’s camp are reporting that Nina has finally accepted the fact that no one is going to hand her an Oscar-worthy role – and she has decided to accept defeat and return to the small screen. But she has her sights set on bigger and better. Nina already is hounding her team to get her an audition for Season 3 of HBO’s True Detective; apparently, she is a huge fan and thinks she has what it takes for the wildly popular TV show. Also, rumor has it that Nina Dobrev is in talks with TPTB at FOX’s new drama Empire, and is trying to get her foot in the door because she knows Season 2 is going to be huge.

A source close to Nina’s circle dished to CDL, “Nina has come to terms with the fact that she isn’t going to be the next Angelina Jolie. She is still determined to land a role on a show bigger than The Vampire Diaries though – just to one up Ian Somerhalder. In her eyes The Vampire Diaries is equivalent to Freshmen, and True Detective is the Senior Class. She is salivating over an Empire role on FOX because it is the network’s biggest show, and Nikki Reed just got cast on FOX’s Sleepy Hollow. She would love being able to boast that her show is bigger than Nikki’s.”

So far, neither Empire nor True Detective have cast Nina Dobrev – but she is not taking “no” for an answer. Do you think she would do well on either of those shows? Or should she have taken The CW’s offer and returned to The Vampire Diaries? Let us know what you think in the comments below!