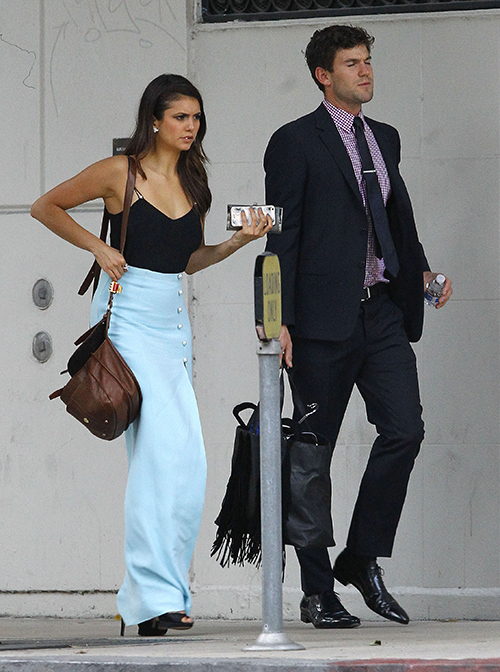 Just in case Ian Somerhalder and Nikki Reed hadn’t heard the rumors – Nina Dobrev and Austin Stowell made their relationship Twitter official on Tuesday, October 20th. Nina and Austin were first linked together back in June 2015 when they were spotted by eagle-eyed fans kissing. The former Vampire Diaries actress didn’t exactly deny the rumors that she was dating Stowell, and since June they have been spotted all over the place together – and always pack on the PDA when they know the paparazzi are watching. Nina Dobrev and Austin Stowell took their relationship to the next level earlier this month when they made their first red carpet appearance together at the premiere of Austin’s new movie “Bridge Of Spies.”

Several Vampire Diaries fans have noted that it seems like Nina took a page out of Nikki Reed’s playbook and has been trying to rub her new relationship in her ex Ian and his new wife’s faces. In Nina’s defense, Nikki Reed did the exact same thing to her when she and Ian were married If we were in the same boat as Nina, we can’t say that we wouldn’t do the exact same thing – Nikki keeps bragging about marrying Ian, so Nina might as well brag that she has moved on with Austin and prove that she could care less about Ian.

Austin Stowell took to Twitter this week and posted a screenshot of Nina’s Twitter page and captioned it, “That awkward moment you realize you aren’t following your girlfriend on Twitter.” Nina Dobrev posted a similar tweet a few minutes later and laughed it off by saying, “That awkward moment when u realize ur not following him either&gotta do it realfast b4 he realizes.” Nothing says official like some PDA on social media.

Do you think that Nina Dobrev and Austin Stowell are in it for the long haul? Is Nina going a little overboard with the PDA to fire back at Nikki and Ian? Share your thoughts in the comments below!