Nina Dobrev and Austin Stowell In Love with PDA, Not Each Other? Showmance to End Ian Somerhalder and Nikki Reed Association? 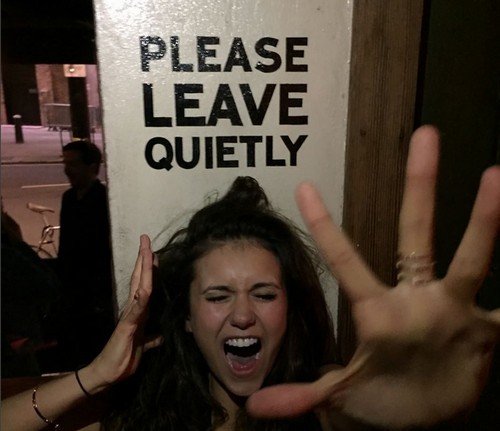 Nina Dobrev and Austin Stowell are in love and packed a fashion week party with plenty of PDA to prove it – or are they in love with the PDA? The new It Couple hasn’t been shy when it comes to kissing and showing their love for each other, but is the relationship real or a showmance to end the association with Ian Somerhalder and Nikki Reed?

After Nina dumped Ian, quit ‘The Vampire Diaries,’ and attempted to start a movie career, Dobrev seems to be struggling with landing a role. Following Nina’s departure as Elena on TVD, her former cast mates and even producers teased fans with the character’s possible return. Dobrev has been pretty adamant she won’t be returning to ‘The Vampire Diaries’ and has been working on creating a new life for herself, free of the Ian Somerhalder and Nikki Reed love triangle.

Part of that new life is Nina’s new boyfriend, Austin Stowell. Shortly after Dobrev quit TVD, she and Austin took a vacation to St. Tropez where they happily flaunted their romance with passionate kissing, embracing, and sexy swims in the pristine ocean. Nina and Austin made sure paparazzi got plenty of pictures of their tropical trip.

Since their vacation, they haven’t slowed down on the PDA. Dobrev and Stowell recently spent their time at Eli Mizrahi’s intimate Founding Member launch dinner party making sure everyone saw them getting cozy. “You can tell how much they love each other just by the way they speak and their mannerisms toward one another,” our source at the party told E. “Austin is such a gentleman and treats Nina with such respect.”

But all this PDA and perfectly timed romance seems to align with Nina’s push for another career-making role. Dobrev was set on a movie career, but hasn’t had any project offers. Rumors claim she is now adjusting her goals and is desperate for a role on big show like, ‘True Detective’ or ‘Empire.’

Could Nina Dobrev’s romance with Austin Stowell just be a showmance to benefit both their careers? It would certainly be an easy way to seemingly end the constant association with Ian Somerhalder and Nikki Reed. Ian and Nikki have also been working to exorcise the stigma of Nina Dobrev and Ian Somerhalder’s relationship from their lives, as Reed is pushing Ian to quit ‘The Vampire Diaries’ and attempt a movie career of his own.

What do you think of think of Austin and Nina’s relationship – real romance or career-boosting showmance? Let us know what you think in the comment section below.