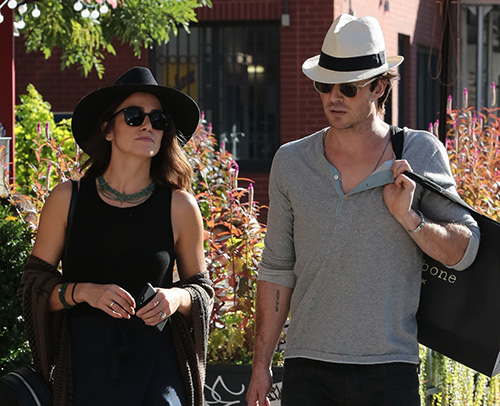 Nikki Reed landed the role of Betsy Ross on ‘Sleepy Hollow’ and has succeeded in bringing a sexy edge to the character. However, Nikki’s sex appeal upsets her husband, Ian Somerhalder, as ‘The Vampire Diaries’ star wants her to be more motherly. The frustrations follow Somerhalder and Reed’s growing feud over starting a family.

Ian’s thirst for a family started when he was dating Nina Dobrev. The constant push for marriage and a baby actually drove Ian and Nina apart. Dobrev dumped Somerhalder and Ian ran into the arms of Nina’s friend, Nikki Reed. While Nina tried to move on, Ian and Nikki married after a quickie engagement that ended up triggering the end of Dobrev’s role on ‘The Vampire Diaries.’ Nina Dobrev quit TVD and her role as Elena to pursue a movie career, while Ian pursues a family with Nikki Reed.

Somerhalder is ready for kids NOW, and was even rumored to hope for a honeymoon baby. The couple eventually agreed that they didn’t want to push for a baby too quickly, but Ian is allegedly tired of waiting. Perhaps Nikki was once on board for having a baby with Somerhalder, but Reed recently scored a role as Betsy Ross on ‘Sleepy Hollow.’ Nikki is focused on cementing a career post-Twilight and doesn’t want to stall her progress for anything – including a pregnancy.

The goal of ‘Sleepy Hollow’ showrunners was to bring a sexy twist with to the show with Nikki Reed. Since Reed made her debut as Betsy, she has been showing off her figure and features with leg-revealing dresses. The 27-year-old wore an abstract pattern mini dress to Comic-Con in New York to show off her long, lean legs. Reed also wore some barely thigh-skimming shorts to launch her capsule collection of handbags at Bloomingdale’s in New York.

Showing off is great for television, but not so great for relationships. Ian, who is supportive of Nikki Reed, isn’t happy with Nikki or the showrunners for constantly making Nikki a giant piece of eye candy. Somerhalder complains under the premise of trying to prevent his wife’s career from relying on her body, but the fact that Ian wants Nikki to adopt a more motherly lifestyle is obvious. The baby and pregnancy plans has been a hot topic between the two, and Somerhalder isn’t backing down.

What do you think of Nikki Reed’s style? Is the former ‘Twilight’ star relying on her good looks and sex appeal to further her career? Let us know what you think in the comment section below.