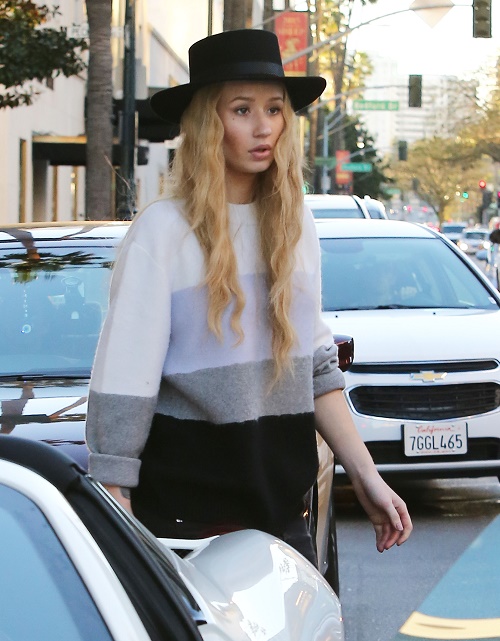 Move over Ariana Grande – there is a new wretched diva in town! Rapper Iggy Azalea blew fans away at her recent WinterFest performance on January 24th at the Sundance Film Festival, but apparently her horrible diva antics backstage blew away the crew. A new report reveals that Iggy had some ridiculous backstage demands at the concert, and even treated the sponsors like dirt. Who would have thought that Iggy Azalea was such a little diva?!

In the February 16th edition of OK! Magazine an insider snitched that, “Iggy threw Billboard, the sponsor of her event, out of her rehearsal. She was rude to the staff and had a big attitude, yelling that nothing was right and she needed more space. She also said her mic was too hard for her to hold. Her backup crew gave it their all, but she still criticized them for being sloppy.” It’s no secret that the “Black Widow” singer can be a bit on the high-maintenance side, but OK! Magazine’s insider makes her sound like a monster.

Iggy Azalea sounds like a wretched celebrity to have to work with. But, in her defense, her WinterFest performance was literally the same week that photos surfaced of her live-in boyfriend, LA Lakers’ Nick Young, out partying with another woman and leaving the club and going to her house. The cheating scandal swept over the media like wild fire – and despite Iggy’s tough exterior, she clearly was affected by it. So, we’re going to give Iggy a free pass on this one. She may not be a total diva (yet), she could have just been having a bad day because she seen photos of her boyfriend going into another woman’s house at 3:00 in the morning.

What do you think? Is Iggy Azalea a total diva? Or would you be in a bad mood too if you just found out your boyfriend was cheating on you? Let us know what you think in the comments below!