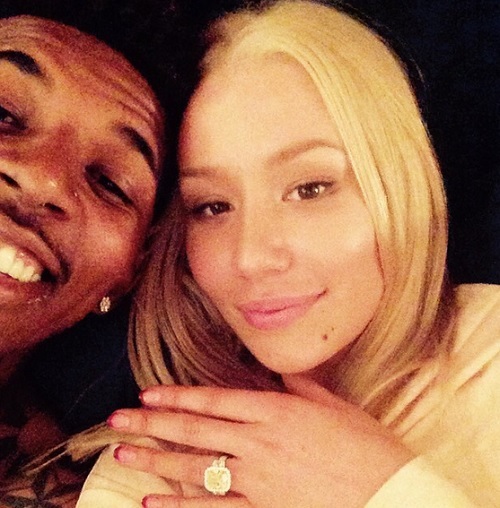 Iggy Azalea is getting married! Rapper Iggy Azalea is off the market – her longtime boyfriend Nick Young reportedly popped the question and asked Iggy to marry him. She said YES! On Monday, June 1, Nick’s pals gathered in California to celebrate the Los Angeles Lakers player’s 30th birthday. At the party, Nick, also known as “Swaggy P,” got down on one knee in front of everyone and proposed to Iggy.

Despite Nick’s rumored cheating in 2014, and the couple breaking up and getting back together, Iggy Azalea squealed with delight and accepted the engagement ring. By the way, it’s not just any engagement ring. Nick reportedly designed the ring himself with the help of Jason in Beverly Hills, and Iggy quickly took to Instagram to post pictures of the 8.15 carat yellow gold bling. Seriously, the ring is breathtaking – and all of the diamonds and gold apparently blinded Iggy and made her quickly forget about her new fiance’s cheating scandals less than a year ago.

After Iggy said “yes,” she and Nick Young both flooded Instagram with some pictures of her rocking her new engagement ring while they posed together. Iggy captioned all of the photographs with “#isaidyes.” The rapper will have plenty of time to plan her wedding – because she just recently cancelled her 2015 concert tour. Although word on the internet is that “The Great Escape Tour” was cancelled because Iggy wasn’t selling any tickets, she insisted in a recent interview in Seventeen Magazine that she just “needed a break,” and she wanted to work on new projects and was ready for a change of pace. Regardless of why the concert tour was cancelled, one this is for sue Iggy is definitely getting a change of pace – she’s an almost married woman!

Do you think that Iggy and Nick will make it down the aisle? What kind of wedding do you think they will have? Now that Iggy is getting married, will it be a long time before we hear any new music from her? Let us know what you think in the comments below!