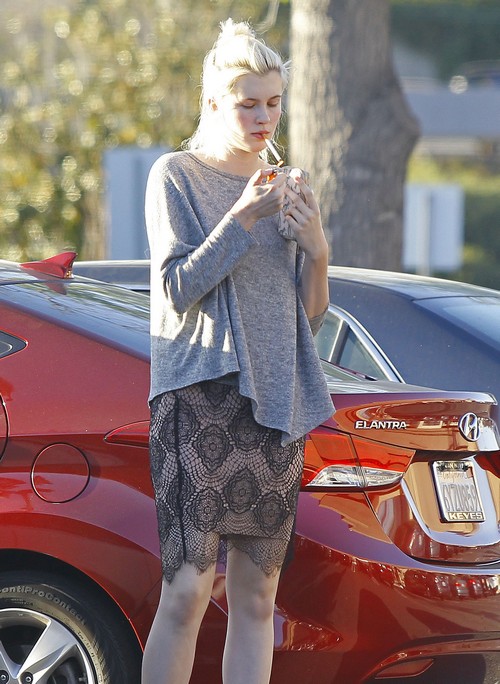 Model Ireland Baldwin has allegedly checked into rehab. The 19-year-old model is the daughter of Alec Baldwin and Kim Basinger, and it is reported that she entered a drug and alcohol treatment center in Malibu on Friday, April 10.

An insider tells Radar, “Ireland, accompanied by her mother Kim, did her intake at a center in Malibu on Thursday and checked in the following day.

Ireland took to Instagram sharing a photo of some reading material that she may have brought with her to the facility. It looks like the young model is reading “Desperate Voyage,” and “The Lonely Sea and the Sky.”

While many treatment facilities do not allow patients to use Internet, or personal devices, sources told Radar, “patients are allowed to use their phones, go online, and are fed elaborate dinners such as filet mignon.” It is reported that the facility is costing the family $20,000 a month.

Ireland also shared some thoughts on Twitter, revealing her struggle subliminally. She Tweeted on April 12 and said “God…Grant me the serenity tonight.” Follow by the praying hands emoji. According to Radar’s source, Baldwin did not enter the facility willing, and entered kicking and screaming. Earlier in the week she posted on Twitter that she would not be attending Coachella. When a fan asked if she would be going to Coachella she responded and said “Nochella for me,” with a crying face.

Radar’s inside source also said that she is not the only one in the family with alcohol problems. They said, “Alcoholism runs in their family. Two of Ireland’s relatives also went to this facility, so this place is well-trusted in the family.”

Ireland recently responded to these allegations on Twitter by saying, “Apparently I’m in rehab for intensive partying soooo I’m just going to lay pretty low for a bit and maybe get some frozen yogurt.”

What do you think? Is Ireland Baldwin really in rehab for an alcohol and drug issue, or is she telling the truth on Twitter and just eating some frozen yogurt? Let us know what you think in the comments below.