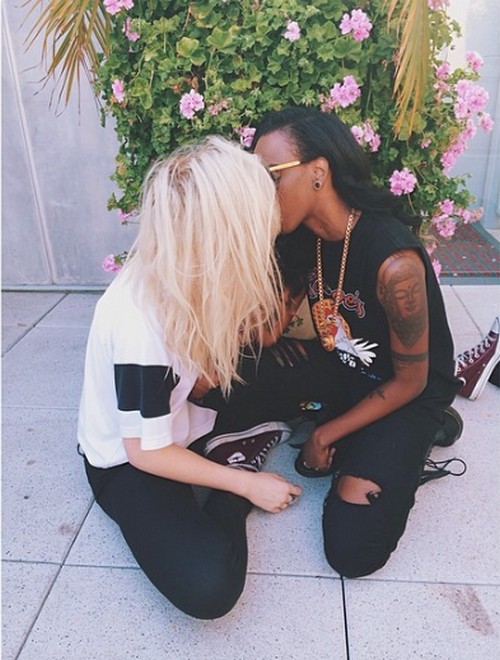 Ireland Baldwin has had boyfriends in the past, so it’s not clear whether this latest development is just Ireland exploring her options or definitive proof that she’s not straight. Celeb children seem to thrive on drama, and posting pictures of their significant others certainly does that. Either way, Ireland posted several pictures of her hanging out with female rapper Angel Haze on Cinco de Mayo, and in one of those pictures, she just happens to be making out with Angel.

Ireland captioned the picture, “happy cinco de mayo xx.” Angel Haze is famously bisexual, but Ireland has not commented on her sexuality one way or another. I doubt she plans to, and honestly, I’m surprised she posted anything at all. Then again, she is quite active on Instagram, and she usually does post pictures pertaining to her personal life.

Ireland is also technically single right now, having broken up with boyfriend Slater Trout last March. Sources had explained at the time that Ireland’s life had gotten too busy for her to maintain her relationship with a steady boyfriend, and that she had to prioritize and put her modeling and schooling first. Plus, they also added that Ireland knew the relationship wouldn’t last forever, and it was more out of a sense of obligation that she had stayed with him that long.

Granted, sources always try to slant their stories to be flattering to their subjects, so it could have easily been Ireland’s family or reps who put out that story. It’ll be interesting to see how they try to spin this story, especially since the picture of Ireland and Angel kissing is still up, even as comments keep building. If Ireland truly doesn’t have time for a relationship, she and Angel could just be having a fling, or they could even be friends who decided to stir things up by putting that picture online.

What do you guys think? Are Ireland Baldwin and Angel Haze going out? Or are they just fooling around? Let us know your thoughts in the comments below.