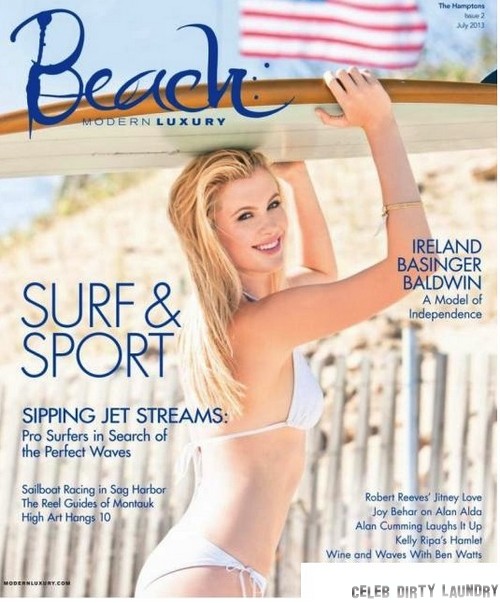 America needs another blonde bombshell like The Kardashians need ANOTHER reality show. Kanye Kardashian and Rob can Take Alaska? In walks perfect 12, Malibu Barbie, innocently youthful 17 year old Ireland Baldwin, daughter of Kim Bassinger. Decked out in an all white bikini, and ruining a petite chic’s appetite, she vogues for the cameras on the cover and an accompanying photo spread in snobby Hampton’s magazine, Beach : Modern Luxury Hamptons.

Being the seed of an Academy Award winning Georgia Peach doesn’t hurt your career at all. Especially when your Pop is Alec ‘Homophobic’ Baldwin. He’d probably tell the modeling agency “I put my foot up your f**king ass, but I’m sure you’d dig it too much,” (like he did in his twitter rant) if Ireland didn’t get the coveted cover. Don’t worry Paris Jackson. You will ultimately become the celebrity of your dreams too. Your slot is bought, and paid for, just like the victims exposed in your daddy’s FBI file.

Ireland Baldwin, looking exactly like her mom in the sexy swimwear, makes you want to watch “9 1/2 Weeks” in the dark, in a closet, with your shirt off. Her mom is a quarter. She is a dime. To rub it in even more she reveals:

‘I lived in Africa for a little while so I was a real-life Cady Heron (from Mean Girls),‘ she tells the magazine.

She also adds that her favorite healthy snack is ‘Almond butter on apple slices.’ In order to keep fit, Ireland works out two times a day (and probably eats cotton balls dipped in juice) to keep in shape, but she says she also likes to indulge in ‘paddle boarding and surfing.‘

Congratulations, and welcome to the IT GIRL clique, but now we want you to go away, or stop being so freaking beautiful.