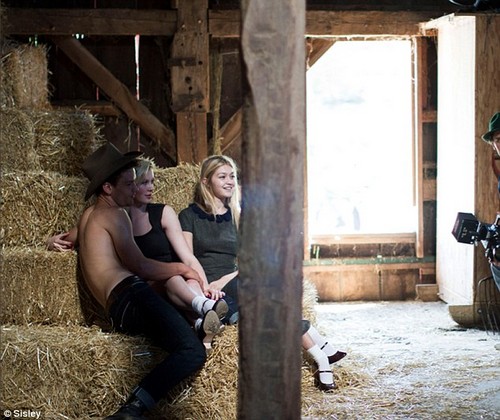 18-year-old Ireland Baldwin is probably giving her father Alec Baldwin a coronary right now, what with her lesbian relationship with Angel Haze and her going topless in modeling shoots.

Ireland is featured in a new campaign with Gigi Hadid for Sisley Jeans, and it’s a pretty steamy campaign for someone who just turned 18 and has only been modeling for a few years. Most of the shots are pretty harmless, but there’s one black-and-white photo that features Ireland topless and making out with a guy in a cowboy hat, while Gigi Hadid stands to the side.

The picture is supposed to tell a story of, “two girlfriends on a road trip who encounter a sexy cowboy before a debaucherous love triangle ensues.”

I can already see Alec’s face getting redder and redder before he bursts into one of his infamous tirades. The guy’s pretty protective of his daughter, so how will he react upon seeing these photos? In fact, I’m surprised we haven’t heard anything about his reactions regarding Ireland’s new girlfriend, especially since the news has gone viral over the past few months. He’s definitely heard about it, but we’re guessing that in the wake of his recent homophobic scandal, he’s staying quiet lest he causes any more controversy.

But with that being said, I doubt he’ll stay quiet about these photos. He may not comment on them publicly, but he’s definitely going to give Ireland a call and probably scream at her in a nonsensical tirade. But even then, he will probably have to get used to these kinds of photos if Ireland is serious about modeling, which she seems to be. There’s just no way to avoid topless and ‘sexy’ modeling shoots, especially if you’re a young up-and-comer within the industry.