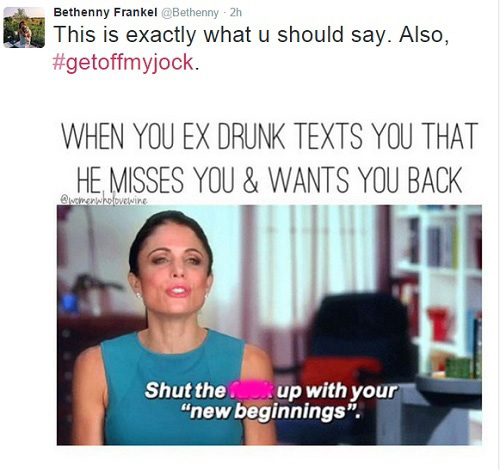 Jason Hoppy appears to have resorted to drunk dialing Bethenny Frankel to beg her for another chance – and she isn’t not happy about it. Could a vulgar tweet from Bethenny this morning be her way of telling estranged husband Jason Hoppy there is no way in hell they will ever get back together.

Bethenny and Jason have been in an extended and bitter battle over everything. What’s at stake? Jason reportedly wants a 50% split of the $120M from the sale of Skinnygirl to Beam Global in 2011. Hoppy also allegedly wants the couple’s $5M apartment in NYC. The duo is also still fighting over custody of their 4-year-old daughter Bryn. Is the nasty tweet her way of telling people Hoppy is the one prolonging the finalization of the divorce because he wants a new beginning?

The Twitter post says, “This is exactly what u should say. Also, #getoffmyjock.” The meme that accompanies the tweet is Bethenny Frankel with the caption “Shut the f**k up with your ‘new beginnings.'” Wow! That is harsh and to the point, wouldn’t you say? If Jason Hoppy is trying to get Bethenny to stop the divorce proceedings, then she has sent a no-holds-barred message – via Twitter no less – that there is absolutely ZERO chance of a reconciliation.

Jason has been mum about the divorce, but it appears that Beth has trouble keeping her mouth shut about the duel to end the marriage. At the “The Real Housewives of New York City” reunion host Andy Cohen asked point blank if the couple’s divorce was final. Bethenny Frankel jumped at the chance to passively-aggressively SLAM daughter Bryn’s daddy, describing the hostile dissolution of their marriage “the most excruciating thing I’ve ever even come close to being in.”

The former talk show host has already admitted she has been dating. Why then can’t the Bethenny Frankel/Jason Hoppy divorce drama end? What does this morning’s tweet mean, if anything?

Was Beth just in a bad mood today and the “Shut the f**k up with your ‘new beginnings'” tweet meant absolutely nothing? What do you think? Was this a tweet posted merely for shock value or has Jason been begging for a “new beginning?”