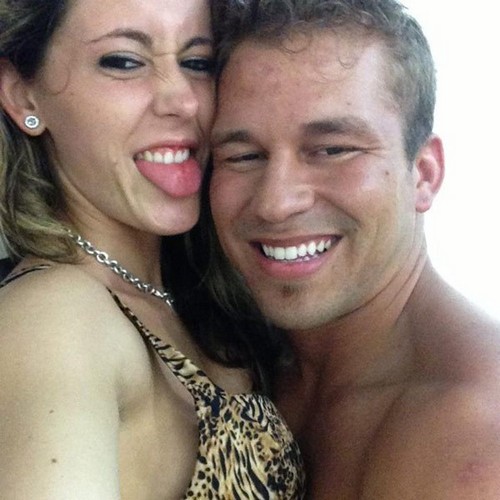 A Jennelle Evan and Nathan Griffith breakup is nothing to be surprised about. Jenelle Evans’ on-again/off-again relationship with Nathan Griffith continues to remain on-again/off-again, despite judge orders to stay away from each other. According to a new report from Radar Online, Jenelle and Nathan are continuing to ‘trade blows behind the scenes‘, even though they are under strict orders to keep contact to a minimum.

Nathan Griffith was arrested for domestic violence in early March, and the two technically haven’t spoken since then. However, they clearly have defied the rules and stayed in touch, especially since their private drama has been [as usual] broadcast in the most public manner possible. Exhibit A: Nathan Griffith changing his Facebook status to ‘single’. Exhibit B: Jenelle Evans claiming that she was moving back to North Carolina.

Plus, sources add that Jenelle Evans has become even more bitter towards Nathan Griffith since this ‘break’ was ordered by the judge. They explain, “This has basically given Nathan a break. Jenelle is now truly a single mother taking care of Kaiser and trying to see Jace. She’s done it all on her own and it’s been really hard on her, but she’s done a great job. [However] both of them are really hurt right now. Couples counseling was good for them when they were going but now that they can’t speak it is a lot harder.”

Right. Well, I’m sure these crazy kids will work it out and be back at each other’s throats in no time, especially since they’re not going to sacrifice their fame over a few fights. They’ve put in far too much effort in for that, and there’s little chance that they’ll throw it all away over something so inconsequential.

What do you guys think? Will Jenelle Evans and Nathan Griffith break up for good, or are the rumors of a break up way too premature? Let us know your thoughts in the comments below.