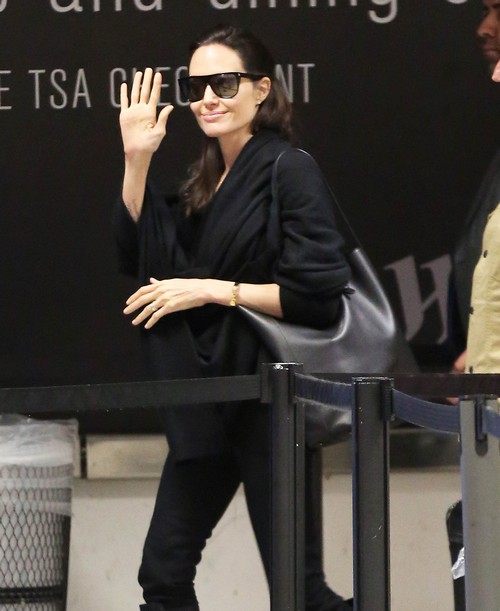 New reports confirm that Jennifer Aniston and Angelina Jolie hate each other as much as ever and we are not surprised. So you know all those interviews that Jennifer Aniston has been giving talking about how much she has forgiven Angelina Jolie and how much she ‘loved’ Unbroken? Yeah, that’s just a load of tosh designed to make her good look. We’ve been saying as much for the past week, but a new report from Star Magazine also confirms it.

Star’s report goes into detail about how Jennifer and Angelina avoided each other on the Critics Choice Awards red carpet, specifically going out of their way to stay out of each other’s paths. Legitimate news outlets have also confirmed that, claiming that Angelina Jolie only decided to walk the carpet after Jennifer Aniston and Justin Theroux had gone into the venue. Plus, they requested to be seated far away from each other, and they stuck to their ‘sides’ of the show as opposed to mingling with everyone.

Star’s source adds, “Jen and Angelina never spoke to each other, but you could tell they were very aware of each other’s presence. You could really sense the tension between them. Their animosity is baffling, but the truth is, they hate each other and always will.”

I don’t understand the comment about the animosity being ‘baffling’. How exactly is it baffling? Angelina Jolie fell in love with Jennifer Aniston’s husband ten years ago, and Jennifer spent the next decade passive-aggressively dissing Angelina in the media and playing the victim – DESPITE the fact that Jennifer and Brad were over long before Angelina came into the picture.

But of course, the media sensationalized the story – with Jennifer’s help – and it became all about Angelina, the homewrecker. So obviously Jennifer is trying to make that worse by pretending that she’s graciously over the whole thing, which in turn makes Angelina look even worse for not speaking out. A true media expert, that Jennifer Aniston.

What do you guys think? Do Angelina Jolie and Jennifer Aniston still hate each other? And is their hate feud still in full swing, or have they both calmed down? Let us know your thoughts in the comments below.

Angelina Jolie departing on a flight at LAX airport in Los Angeles, California on January 23, 2015. Jolie has been busy as of late promoting the film ‘Unbroken,’ which she produced and directed. FameFlynet