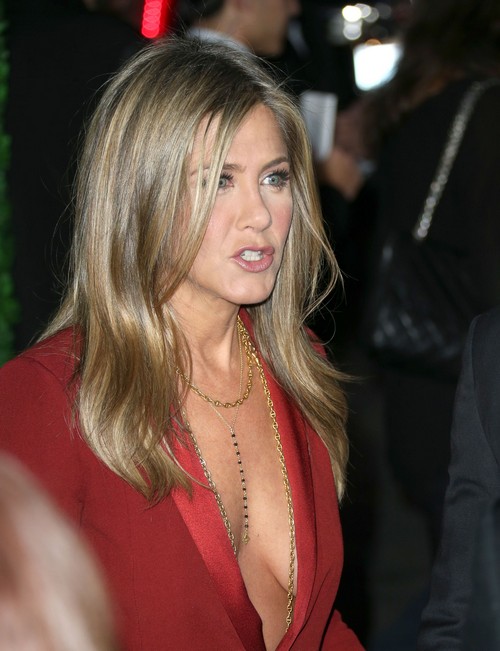 Jennifer Aniston keeps claiming that she’s completely over Brad Pitt and Angelina Jolie, but it’s sometimes difficult to believe her when she keeps bringing them up so much. Yes, one could argue that she gets asked these questions in interviews and she HAS to answer them, but she’s Jennifer Aniston. Her reps could easily shut down this line of questioning if they want, but they don’t – so we can infer that Jennifer Aniston wants to be asked about Brad Pitt and Angelina Jolie, probably because she knows that the most amount of publicity she gets is always when it concerns Brad and Angelina.

Her latest comments on the never-ending love triangle come via Entertainment Tonight, when she explained, “I think that [the media gossip] is slowly coming to an end. I really do. I mean, that movie [Unbroken] is so beautiful and wonderful and she did such a gorgeous job. I think that it’s time people stop with that petty BS and just start celebrating great work and stop with the petty kind of silliness.”

Right. And I assume the timing of her comments is just a coincidence? Jennifer Aniston doesn’t get an Oscar nomination and neither does Angelina Jolie, and suddenly Jennifer is praising her to seem like the bigger person? Trust me, if Angelina had pulled off an Oscar nomination, we would NOT be hearing this. But at this point, Jennifer’s team is just trying to help her image, since her Oscar campaign came to a brutal end when her name wasn’t called out last week.

Plus, Jennifer Aniston’s entire post-Friends career has been built around her image as a jilted lover. She can claim that the media-manufactured love triangle was all ‘petty BS’, but she shouldn’t forget that she herself had a major hand in creating the aforementioned love triangle.