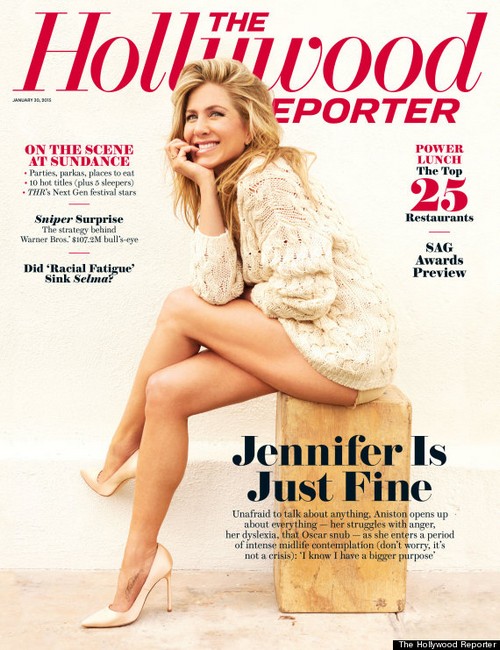 Jennifer Aniston is finally pregnant, y’all! I’m kidding, but you know that’s the headline our favorite Friends star wants out there. In very convenient timing, Jennifer covers the latest issue of The Hollywood Reporter, and in the accompanying interview, talks about how she and Justin Theroux are trying to start a family. And remember, this interview was probably conducted before Oscar nominations came out, so this was clearly directed to Oscar voters in campaign efforts to take home the gold. I mean, Oscar voters generally tend to be old, white, male, and family-oriented… marriage and babies is like catnip to them, especially when it comes to voting for women. It’s unfortunate and sexist, but there’s Hollywood for ya.

And when Jennifer is asked about having children in the interview [a.k.a. when her team probably demanded that she get asked about children], Jennifer Aniston replied, “Who knows if it’s going to happen? It’s been a want. We’re doing our best.”

Well, then. I guess it went from ‘why are the tabloids always talking about babies’ to ‘let’s feed the media frenzy by talking about babies’. I mean, this is the same woman who’s constantly complaining about media intrusiveness and how they’re always making things up. But now, she admits that she and Justin Theroux are actively trying to have a baby, knowing full well that it’s going to be the biggest headline that comes out of that article.

Honestly, I wouldn’t be surprised if Jennifer Aniston and Justin Theroux are trying to get pregnant, if only to fuel Jennifer’s future Oscar efforts. Ok, that’s harsh. But really, it’s Hollywood. Anything’s possible.

What do you guys think? Is Jennifer Aniston planning to get pregnant, or was that just a line she fed the media in her efforts towards her awards campaign? Let us know your thoughts in the comments below.