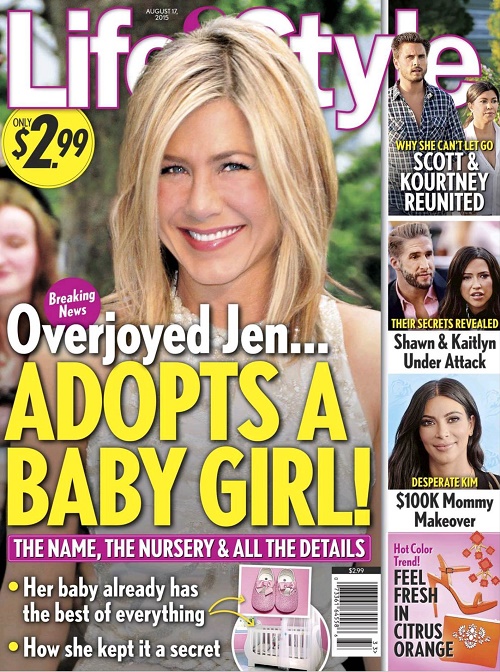 Jennifer Aniston is finally going to be a mom. After years of pregnancy rumors, the “Friends” star finally has a baby on the way! But Aniston won’t actually be giving birth. According to a new report, she is adopting a baby girl and finally starting a family of her own with her husband Justin Theroux. This week’s cover of Life & Style Magazine reveals that Jen is almost officially a parent!

The cover of Life & Style Magazine features a photo of Jennifer Aniston beaming and the headline teases, “Breaking News: Overjoyed Jen Adopts A Baby Girl! The Name, The Nursery, And All Of The Details.” According to Life & Style, Jennifer Aniston and her fiancé of three years Justin Theroux finally got married in a super secret wedding at their Bel-Air home in June 2015, and as soon as the ink was dry on their marriage license, the couple began the paperwork for adoption.

An insider dished to Life & Style Magazine, “Jen and Justin signed papers after going through a series of interviews. There is still a long way to go. Jen has never been happier or more excited in her life.” The insider went on to reveal that Jen felt her biological clock ticking and was beginning to fear that she would never be a mother. But, after she spent some time with Sandra Bullock and her adopted son Louis, she realized that she wanted to adopt a baby girl, and hopes to have the same magical bond that Sandra and Louis have.

Jennifer and Justin are now moving on to the “matching” phase of the adoption process, and Jen is determined to find a baby girl that is perfect for them. According to Life & Style Magazine’s source, “Jen has always wanted a daughter. I think because her and her mother aren’t that close Jen feels an emotional need to ‘get it right’ as a mother to a girl.” Jennifer has reportedly already begun decorating a pink nursery and has told her pals she is going to name her baby “Phillipa,” and call her “Pippa” for short.

Are you as excited as we are for Jennifer and Justin? What do you think of the name Jen has picked out for her baby girl? Let us know what you think in the comments below!