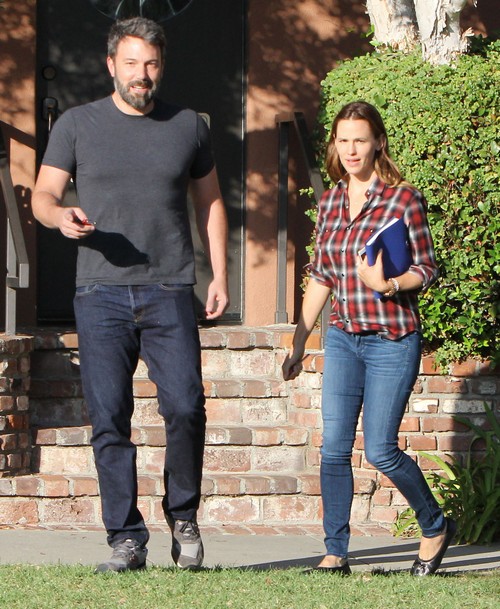 In Touch magazine is reporting that Jennifer Garner and Ben Affleck have signed up for marriage counseling and snapped photos of the duo leaving an LA counseling office. The two arrived and left together and an insider says that Ben Affleck “begged her” for another shot at making their marriage work. But is this a reconciliation effort or just the two trying to work through their issues so they can be civil co-parents? Likely the latter.

Ben Affleck and Jennifer Garner are reportedly doing two hour sessions once a week in an effort to make things better between them – whether it’s to have a happier divorce or another shot at marriage is the real question. Let’s face it, though, unless these two can get personality transplants, they are not going to be any more compatible after this round of counseling than they have been after a decade of marriage.

Ben Affleck loves his booze and gambling and those are two big habits that Jennifer Garner despises. Sure Ben might give them up for a while, but he’ll resent her for trying to change him fundamentally. And that seems to be the crux of their divorce dilemma – Ben Affleck is not the man that Jennifer Garner wants him to be. That can’t be a good feeling for a guy who can play a superhero on screen but is made to feel “less than” at home.

According to In Touch, the therapist made it clear that Ben Affleck is not the only one to blame for their marriage problems and told Jennifer Garner that her controlling ways need to stop and she needs to make their relationship a priority. In the past, Jennifer has always put the kids first – which is understandable – but her constant criticism plus putting Ben in last place has made him feel unwanted and unworthy which feeds his drinking and gambling habits.

The insider also says that Ben Affleck was pleased the therapist told Jennifer she has homework to do on their relationship as well whether they’re split for good or not. There’s also the betrayal that Jennifer Garner felt when news broke that Ben was shagging their nanny Christine Ouzounian. Although they were technically separated at the time, Jennifer feels like it was a major betrayal that Ben was cheating under her nose with someone she hired to care for their kids. They’re working through that in therapy.

The only thing that’s clear at this point is that Ben is committed to the three kids he has with Jennifer Garner – Violet (9), Seraphina (6) and Samuel (3). Ben Affleck shuttled back and forth to Atlanta to take care of the kids while Jen was shooting a movie. Also, Ben and Jen revealed that they were in counseling prior to announcing their split – and this may just be a continuation of that counseling that they had to put on hold over the summer while Jen was filming – not something brand new.

People magazine’s reports conflict with In Touch and they quote an insider saying, “Jen has really been trying to put all the nanny drama to the side and she is doing well, but there is no way she would ever take Ben back – as soon as she took her wedding ring off, she acted like a different person.” Jennifer has also backed off plans to let Ben live on the same property as she and the kids and thinks him living close by is good enough – she knows they need space.

But don’t look for Ben to show up with Christine Ouzounian on his arm anytime soon – even if he is ready to move on. Rumor has it that Ouzounian has been blowing up Ben’s phone since he came back from Atlanta and is full-on obsessed with the actor who wants nothing to do with the naughty nanny For Ben, it was just a fling – but Christine Ouzounian reportedly wanted much more and pictured herself married to and pregnant by the A-list actor.

But Ben has changed his cell number because she won’t leave him alone. OK magazine also reports that Ben and Jen are discussing paying Christine off to keep her quiet about the affair with Ben, any aspects of their break up she may have observed and any other dirt Christine Ouzounian could peddle about the Afflecks. So as it stands, looks like no reconciliation, no more romance with the nanny, and nothing but a future as co-parents for Ben and Jen.

Stay tuned to CDL for more on the Ben Affleck-Jennifer Garner divorce as news breaks.

Estranged couple Ben Affleck and Jennifer Garner go to a doctors appointment together in Santa Monica, California on September 3, 2015. FameFlynet