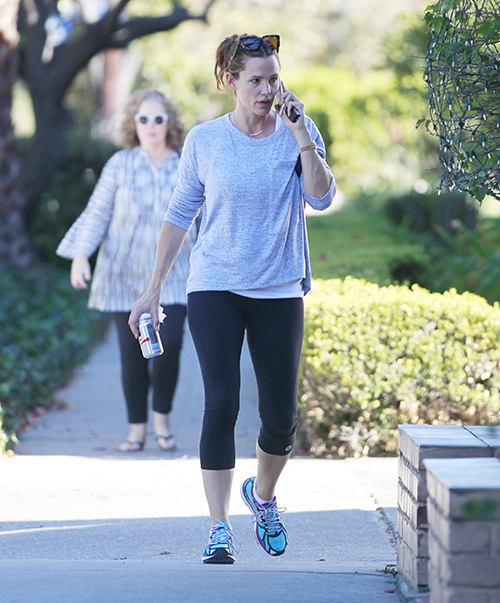 Jennifer Garner is single and lonely since her split with Ben Affleck and it turns out there is no mystery lover any longer after his identify has been discovered. Jennifer only has eyes for Ben Affleck who, unfortunately, also had eyes for the nanny.

Despite numerous attempts to work through the hurt Ben caused with his infidelity, Garner has chosen to remain single and focus on her kids rather than jump back in the dating pool. Garner had us going over Halloween weekend though after she was spotted out with her kids and an unidentified man.

It turns out that the mystery man who was helping Seraphina Affleck learn how to ride a bike was Uncle Casey. As in Casey Affleck, Ben’s little brother. It would be quite a story if Ben’s little brother stepped in after Ben stepped out but that isn’t what happened. Instead, rumors that Jennifer Garner had a hot new relationship starting up made their way back to the “13 Going On 30” actress and made her feel even more lonely. It was like rubbing salt into the wound that she was the topic of some scandalous new boyfriend rumors when, in all actuality, Jennifer was sitting at home with the kids.

Jennifer will probably see her mystery man aka Casey Affleck over the holidays. Garner and her estranged hubby Ben Affleck will be spending Thanksgiving together as a family. Jennifer and Ben have put a lot of effort into making everything as normal as possible for the sake of their three children, Violet, 9, Seraphina, 6 and Samuel, 3.

It seems like Jennifer Garner and Ben Affleck are spending more time together now than when they were trying to stay married. Jennifer is so exhausted with trying to balance the filming of “Nine Lives” with raising her kids often without Ben’s help.

Dating is the farthest thing from Jennifer’s mind right now. Garner is lonely and really wishes this whole cheating scandal with the nanny had never happened. Jennifer tried to convince herself that nothing really happened but the trust is so broken between Jennifer and Ben that their marriage would never be the same even if they were willing to work on it.

Jennifer is just really lonely right now and feeling single as ever. She has no romantic prospects and has buried herself so deeply into raising the kids that Garner won’t be available to date for a long time, possibly even years.